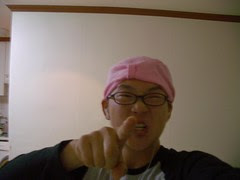 IMGP0956.JPG
Originally uploaded by HappyLunatic.
Yesterday was a beautiful day. I haven't met so many cool people since I've come to Korea. Sorry. I should write more interesting things like...

In a posh Seoul apartment I played Uno, ate chocolate, and felt of rememberance of times past when I was artsy fartsy and filled with a sense of inspirational competition. Inspiration isn't competitive? Huh? really?

I disagree. If you get a bunch of artsy people in a room, there is a wry struggle to show who is the biggest yolk in the room. It's a passive agressive thing or at least I think I was more passive agressive in my days because I was a vegetarian, green leaf smokestack and I was ennuied by Jaime's constant ambivalance.

I'm not making any sense. The question I am struggling with is if I can cook again. I mean I used to cook in the past, but it's been about a year and a half and I don't know how many skills I still have? I believe I can still bake and make desserts, but I think I've lost a bit of my main coursing skills and in Korea I feel a bit lost in translation because I can't really understand the ingredients lists to MacGyver a meal. Do I want to start researching again and experimenting?

I think it might be fun, but I'm afraid reaching for the culinary stars because I become an OCD freak in the kitchen with a knife. I can put that all in the past right? I think I can. But do I want to bring Dr. Jekyl back?

I'm not saying I was that bad, but I start thinking about it too much because there are endless flavor combinations and I'll start doodling pictures of foods and researching as much about cooking as possible and getting lazy and fat and I'll stop my writing and I'll be unhappy, but...