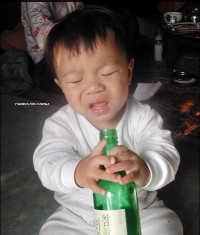 Remind me to never drink soju again. Check out this post.

Pocket books that identify exact calories and nutrients of 93 kinds of foods that Koreans eat most frequently will be distributed to people for free, the Ministry of Health and Welfare recently said.

The pocket books, aimed at preventing people from becoming fat by having a balanced diet, have been written following a nationwide survey on Koreans’ eating habits conducted in 2001. A total of 400,000 copies of the book will be given to people across the nation.

According to the health pocket book, a two-hour walk is recommended to burn off the 540 kcal gained by drinking one bottle of soju.

I had my last cup of soju about three weeks ago (and I was so hung over the next day that I spent my morning dry heaving and hating myself for being so stupid.) And now with the added warning, I find that it is better for me to stick to light beers. 5 beers equal 1 bottle of soju and they won't give me a nasty hangover the next day.

But I think it's better to stick to red wines. They always say that reds are good for your help and many doctors even recommend you drink one glass a day. I've found some really nice chianti's and bordeaux in Seoul. Most of them are under 20,000.