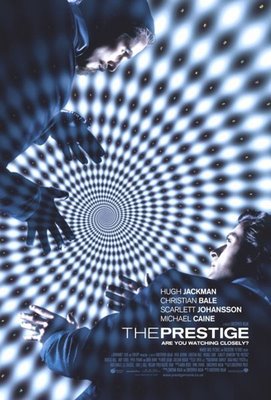 I'm back from a nice weekend. I saw the movie Prestige and I give it a B+. The acting was wonderful and David Bowie leaves a chilling, effective presence in the movie as the scientist Tesla. Hugh Jackman played his role, but it didn't have the gravity of Christian Bale. At times, I felt that I couldn't justify Jackman's character Angier's intelligence to pull off what he did. Now Bale stayed in character right to the end and I found my self going shifting my stance of his character from hate to empathy.

I felt this movie was a bit condescending at time and undermined the intelligence of its audience by leaving very gaping hints at the eventual conclusion. There was a nice twist at the end, but the numerous hints destroyed the credibility of the movie and made it a "Sixth Sense"-esque thriller instead of an intricate "Usual Suspects" masterpiece.