Bo-sam in New York City is a high class delicacy 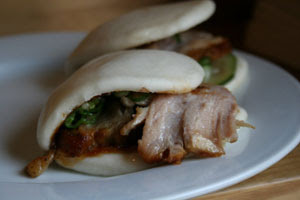 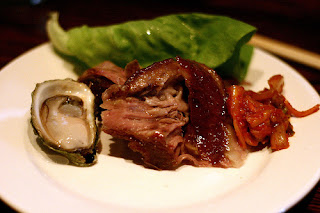 Check out the blog, The Girl Who Ate Everything

Robin is cute as a button and her pictures are absolutely scintillating.

The following link talks about her birthday celebration at Momofuku, a restaurant that has been popping up on my radar. The chef, Michael Chang is a Korean American who is singlehandedly taking Korean Cuisine to the forefront. He's hip, he's innovative, he's skilled, but most importantly- HE KNOWS HOW TO MARKET THE FOOD! Calling Bo-saam, Saam or giving it the euphemism: "the Asian Burrito," is enough to entice the masses. Also, his restaurant sounds Japanese, so it piques the interests of the epicurious The guy is loved by the New York Times, as seen here. It's getting to the point where he could take a hamburger, throw some kimchi on it and sell it for 25 dollars as the Weiguk Burger (The irony being, it's not really Weiguk.)


Here's an interview with Michael Chang (The guy has to learn to take better pictures.^^)
So here's Robin's review on Bo-saam(I'm utterly confused how to spell Bosam now. Is it Bo ssam, Bo-ssam Bosam, Bossaam?)

So...imagine you are back in the states and an acquaintance says to you, "I went and had the most amazing food at Momofuku: Bo-ssam!"
You can nonchalantly reply, "Hmph...I've had the original in Korea."
Food