Dr. Sook-ja Yoon and the Institute for Korean Traditional Food 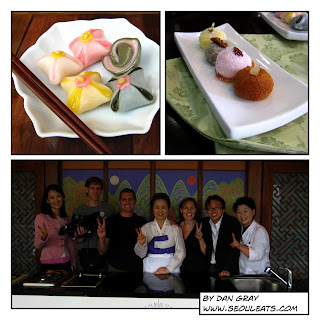 I recently had a chance to meet Dr. Sook-ja Yoon at the Institute for Korean Traditional Food while I was helping a US Television show do a segment on Korean Rice Cakes. Rice Cakes or called “Tteok” are important in many facets of Korean culture. These cakes are a key part of important holidays such as Thanksgiving and New Years. They are also given as gifts to mark milestones in a person’s life such as a child’s first birthday or a wedding. Dr. Yoon has long been an advocate of upholding the integrity of Korean Traditional Food and she is regarded by most as the foremost expert on rice cakes.

The television crew and I were first given a tour of the institute. The building includes a rice cake café on the first floor, a museum on the second floor, several floors of classrooms to teach students, a private studio kitchen, and a food production center. This institute, which is located near Insadong, has 8 wondrous floors devoted to Korean cuisine and culture. The Institute of Korean Traditional Food is like Willy Wonka’s Chocolate Factory, but instead of sweets, people create kimchi, bulgogi, royal court cuisine, red chili paste, and the picturesque rice cake.

Read the rest of the article at visitseoul.net