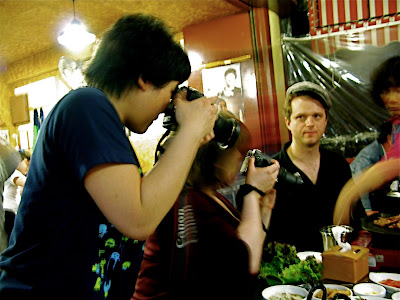 In the past five years, a new Internet phenomenon has begun to boil in Seoul: the foreigner food blogging culture. United by a common desire to explore the international and domestic cuisines found in South Korea, expat foodies now have an outlet for their passion through a community of English-language blogs ― something that was unheard of before 2004.

The ``grandfather of food blogs" was FatMan Seoul, according to Joe McPherson of ZenKimchi.com. It was Seoul's first food blog in English, started by a mystery man whose identity was never discovered. Though shut down in early 2005 with the author's departure from the country, its legacy lives on through inspired bloggers ― one of which still carries on the name, with no affiliation.

After the Web site closed, McPherson noticed that there was a lack of Korean food blogs written in English, and began his own. He converted his personal blog into a food-focused one in 2005, and now the average number of hits per day ranges from 600 to more than 1,000. Since then, English-language food blogs have increased exponentially.

A year later, McPherson began organizing meetings with other bloggers, to find other people with whom to eat out and explore.

``We did a very good Chuseok at my house in 2006," he said. ``From there we really liked the idea of starting a food community."

Expat food blogs differ from local, Korean-language ones in their approach and perspective of cuisines, according to Jennifer Flinn of the new FatManSeoul.com, started in June 2008. ``There tends to be an air of discovery," she said, as opposed to Korean blogs that focus predominantly on the dining experience.