Picanha! at Sao Paolo in Hyehwa 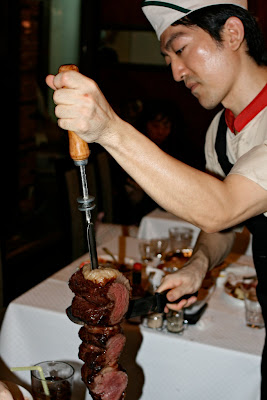 The chef cuts a slice of Picanha.

Picanha is the name given to a cut of the steer that is near the rump. It is a savory, well marbled cut of meat and the Brazilian method of cooking: the skewer the meat on metal swords and then roast it- makes it almost cloud-like. The meat becomes fluffy because the fat drips down and the heat makes the meat expand. I know, it's a strange way to describe a cut of meat, but that is how it tastes. 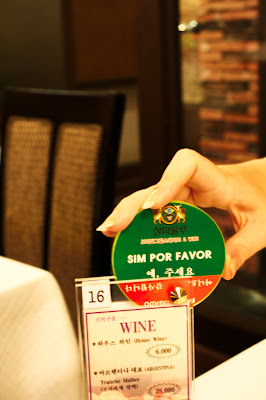 Brazilian Churrascarias are one of the fastest growing types of restaurants in Seoul right now. I think it's because it fits in with the Korean idea of plenty and festivity. For example, take Outback steakhouse: people didn't go there for the steak. They went there for the endless supply of brown bread. I mean if you want, they would even pack some for take out. For Koreans, the idea of "service" means more food. So...the Brazilian Churrascarias fit right in with the Korean ideas of feast and festivity.

Sao Paolo has two locations in Seoul. There is one near Seoul Tae (Seoul National Univ of Education Station exit 14) and they recently opened another place in Daehangno. The house that the restaurant is set in has a Brazilian flair- probably because the owner had spent most of his life in Brazil before coming back and opening these restaurants. Sao Paolo has a wonderful patio because house is hidden away from the main street, so you won't get the noise from the road.

The place is upscale and there is a nice mix of clientel. You'll see families chatting on the first floor, businessmen in booths sipping bottles of wine, and young couples chatting in the curtained red booths on the second floor. 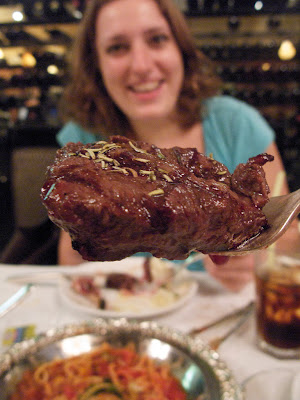 The Churrasco meal starts out with a couple sides of rice, potatoes, beans, a salsa, a BBQ sauce and a mustard sauce. They started us with a cut of tenderloin sprinkled with a little pepper and salt. Oh, the meat is fresh and of high quality so they will cook it on the rare side. If you would like it cooked well, then be prepared to get strange looks and be prepared to wait.

They'll then bring out some spaghetti and bread- yes, they're trying to fill you up with carbs a bit. Then as you eat and chat they'll bring out some fraldinha which I think is a flank, sausages (which you should pass on, take one to be polite), lamb (take extra of this), kangaroo (yep, you heard me), chicken (this is surpisingly good), Ham (I'd pass on this as well) and then they'll bring out the Picanhas. They'll bring the Picanha last because it's the best and most expensive cut of meat. They finish off the meal with some pineapple that they have skewered as well. 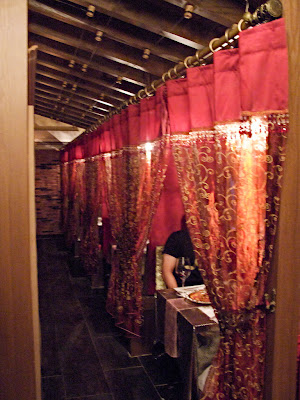 Eating at Sao Paolo is a bit of a poker game. You have to wait until you get the best cuts and get as much as you can because you don't know when they'll be back. My major gripe of for this place is the lackadaisical service, but that pertains to almost all Korean restaurants-minus a few of the hotels. 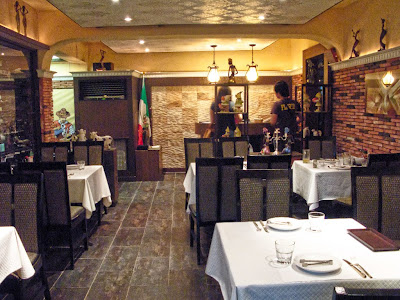 ** (2 Stars out of 4)
The Good: the food, the atmosphere.
The Bad: The lack of English servers and menus, service.

02-764-6079
Directions: Go out Hyehwa Station exit 1 and cross to the other side of the street. It is down the alley next to Puma and to the Basic House.
daehangno restaurant reviews reviews