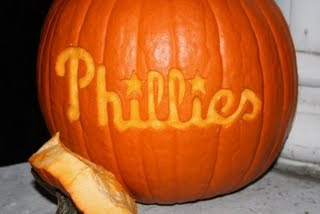 Go Phillies! AGAIN! Here is post I wrote a couple years ago, but I found many people were searching for it because it is almost halloween and because the Phillies are in contention to be the world champions. GO PHILLIES. WIN IT ALL


Oh, my god, I can't believe it! The Phillies, the team that I grew up Loving/hating is in the world series. I grew up in Delaware and these guys sucked for so many years, but I still had the hat and gear. Oh, and I got tons of autographs from car dealerships because my Dad thought it was the All-American thing to do.
I do miss Mike Schmidt. He was my hero growing up and he was the only one on the team that could actually play.
The next iteration of champions came during the Lenny Dykstra, John Kruk era- or what I would like to call the "Beer Belly Era." This was when my sister Jill was in love with the Phillies (guys, she is beautiful, but she likes Truck Drivers and Wrestler Type Guys((Love you, sis)).
Anyway, Go Phillies! Win it all! Put Philadelphia on the map!
Thanks Oven Love for the great pic!