Chuseok is coming up. For all you newbies, here is a Primer 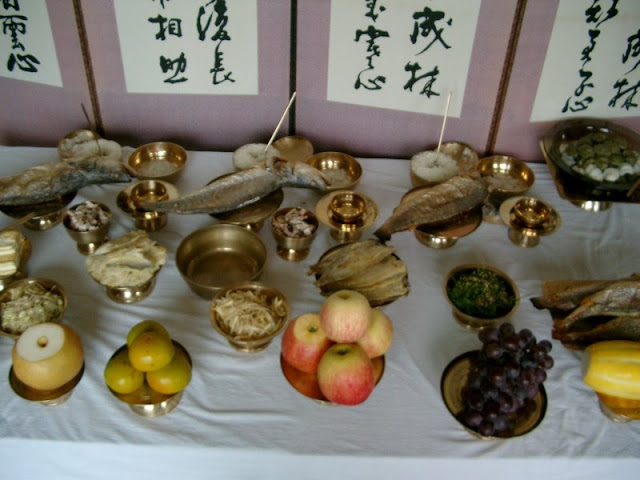 Chuseok is the time of the year when Seoul is empty and everything is calm and tranquil in the city.

This year Chuseok is from Tuesday, September 21st 2010 to Thursday, September 23rd. Many people have the Monday off. I'll be in Nova Scotia for a business conference so I'll be missing all the festivities. Chuseok is a ancestor memorial service- to honor the relatives who bore the hardship of life to give a better life for their children.

For those looking for a primer, he's an article I wrote explaining Chuseok a while back.

Chuseok is the Korean version of Thanksgiving. During this holiday, the family gives thanks to their ancestors by welcoming the spirits into their houses to taste the ethereal flavors of the year's harvest. This may sound superstitious, but the real intention is to commemorate the departed. Because without our ancestors, literally, we wouldn’t exist. This is a family holiday and to be invited to a family's Chuseok celebration is a very special honor. Basically, the family is accepting the guest into their family to not only meet the living relatives that attend, but also the spirits that have passed.

During my first year in Korea I was bestowed this special honor by the Kim family in Gyeong Ju. Jikyeong was a student of mine and we became fast friends and she knew that I was new to Korea and I didn't have anyone to celebrate this holiday with. I accepted her invitation, but with one request: I wanted to participate in the preparation of the various dishes. This request was met with whimsy because Chuseok is seen by many as the “wife's burden.” I didn't know this. I arrived bright and early ready to assist in the kitchen.

What I learned was that the food lacks many of the flavors that Korea is famous for. Garlic and chili peppers are purposely omitted from the Chuseok table for these strong flavors are believed to offend the ancestors. Most of the vegetable dishes such as bean sprouts, spinach, minari (mugwort), eggplant, squash, sweet potatoes and gosari (bracken) were boiled or steamed. Most were flavored with sesame oil and a little salt. I helped Jikyung's mother prepare seafood soup that was flavored lightly with soybean paste, tofu, vegetables, and squid. I then helped fry some tofu, and three whole dried fish.

After most of the food was prepared, we made “song p'yon.” Song p'yon are crescent-moon shaped rice cake that are filled with sweetened red bean or roasted sesame seed sweetened with honey. These were the most labor intensive, yet fun part of the thanksgiving feast. Mrs. Kim first took rice flour and kneaded it with a little bit of hot water to bring the dough together. The dough then had to sit for an hour or so. With half the flour she mixed it with mugwort, which turned it a dark green color. The other half stayed ghostly white. Jikyeong, Mr. Kim, and I then sat around a low table and took a little rice flour and formed a flattened disk in the palms of our hands. Then we filled with either red bean or sesame seed paste and, by closing our hands, we formed the shape of the crescent moon. It was very important to seal in the filling because they were then steamed until they were soft and pillowy.