Food for Thought: What is Making Korean Children Fat?

What is Making Korean Children Fat?
Health classes are moving a few Korean students in a healthier direction this summer. For an hour a week, students participate (voluntarily) in a workout or dance session. According to a recent article in the JoongAng Daily, students of all levels are participating in such a program to fight childhood obesity. Even though an hour a week hardly suffices as exercise, it's progress.
In 2007, the Ministry of Education and Human Resources Development reported that one out of every 10 Korean students was obese. Not only did this figure increase with age, boys also showed higher rates of obesity than girls.
Currently,  obese students are increasing at a 1 percent rate annually.
Although Korean food is relatively healthy, a number of Korean students remain overweight.  With such a strong emphasis on studying, many students are shuttled to after-school classes. Rarely is there time for dinner until late at night. To curb hunger pangs, students consume snacks like chips, candy and soda throughout the afternoon and evening. Along with unhealthy eating habits, physical education remains a less-valued part of Korean education. 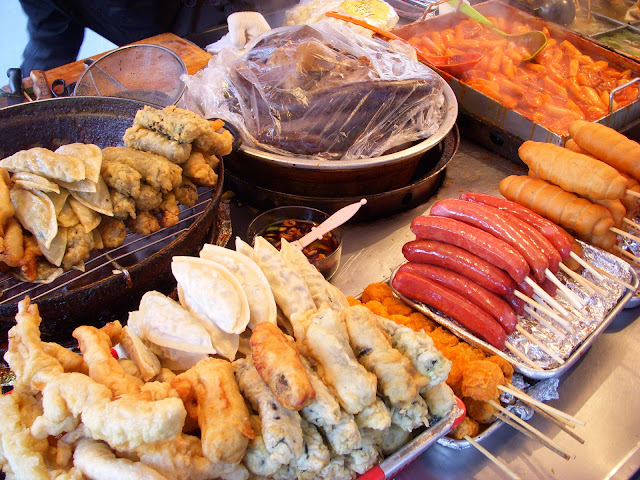 "Older students tend to eat more high-calorie fast foods such as hamburgers and coke. Also they don't have much time to exercise due to college admission preparations,'' a ministry official said.
According to the article, 80 to 85 percent of obese youths continue to be obese as adults and can develop various diseases, including diabetes, cardiovascular problems and respiratory disorders.

So far, the Health Ministry of South Korea has taken some actions to limit the amount of "junk food" advertising. In January of this year, the ministry announced that advertisements for foods that are high in fat, sugar, and salt, would be limited during the prime time television hours of 5 and 7 p.m., and during any children's programming. The limitations include hamburgers, pizza, instant noodles; and desserts like chocolate, candy, and ice cream. Last March, the health ministry also banned junk food sales at schools and their surrounding neighborhoods.
Although advertising ban is necessary- a ban that I wish America would impose on some fast food (many that are part of the Korean junk-food ban)- a number of loopholes exist to combat child obesity. Even though students are finished with school by 5 pm, most students attend after school classes in math, science and English. Rarely (outside of summer vacation) do Korean students have the opportunity to watch television from the hours of 5 p.m. to 7 p.m.
Since most students attend after school programs until late at night, they have unlimited access to the aforementioned snacks. The junk-food ban fails to apply to after-school programs. FamilyMarts, bakeries and ice cream stories outline the perimeter of most hogwans and entice students at their weakest hunger moments.
Students need guidance, from both parents and schools, that tell them health is just as important as good grades. Parents also need to supply students with healthy snack options, or feed them dinner before they attend after school classes. Korea already values the importance of a good education. Ultimately, this education needs to extend to importance of a healthy diet and exercise.

Lindsey Huster is a writer who originally hails from Chicago. She enjoys listening to music,wearing cardigans and generally anything vegetarian. Send her an e-mail here: Lindsey Huster
food for thought lindsey huster snacks