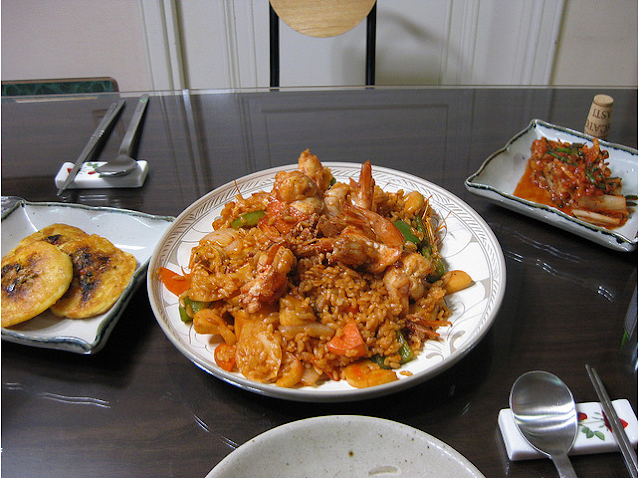 The night started off with my friend exclaiming “I want something European, NOT Korean.” Not that she dislikes Korean, just that she was tired of the same old galbi and bibimbap. We have all been there at one time or another so I was definitely game. There was this Spanish restaurant, La Paella, I had always walked by in Hongdae and was eager to try so we quickly decided that was where we were going.

The first thing we noticed once in the restaurant was that it was aesthetically warm and definitely had a Spanish air to it. It was a fairly petite restaurant in size and had some people waiting in the foyer but we were quickly seated and the hostess was quick with the water. I was impressed up to this point and was excited to have some Spanish food again, especially after finding out that the chefs were from Spain themselves (through the large window that lets you view them work as they create their dishes).

Quick to work we went in deciding what we wanted. Overall the menu was extensive and seemingly delicious but I wanted to try the restaurants namesake, the paella. There were about 8 different kinds of paella to choose from: seafood, chicken, vegetarian, and a healthy mix of other flavors. Luckily I went with my friend and partner so there were three of us. Of course we all wanted a different kind of paella but the paella came with a caveat – you must order two of the same paella. I was thoroughly surprised that they had the audacity to tell me (or anyone for that matter) how much I had to order. What if I went solo? I would surely be coerced into ordering something other than the paella (or pasta, as it has the same ordering rule). Nevertheless, we ordered the chicken paella and their Barcelona salad and went totally Korean and shared between the three of us. The paella did come in the traditional Spanish wok with sprigs of rosemary adorned on the top, which was a nice touch. In the end, the food was delicious but there nothing extremely memorable about it. We were definitely not wowed.

Other things on the menu included meat entrees such as lamb and chicken (available without the ordering rule). Some desserts and coffee were offered as well.

All-in-all, if you are looking for European style food with a slightly romantic feel and are not hesitant to pay for it then this place is surely worth a try. The paella ranges between 12 and 19,000 won (per order and remember the ordering rule!) and the pasta is comparable. Their salad selections will set you back a mere 7,000 won. Other entrees range between 10 and 30,000 won.

Getting there. Line 2 to Hongdae (Honggik Univ.) Station, exit 5. Exit exit 5 and take a left up the little street. When you reach the Manstudio shop, follow the road bearing to the right and La Paella will be up about 50 meters on the right on the second floor. Look for the red triangle logo of the bar below and it is right there.