My Accomplishments in the year 2010 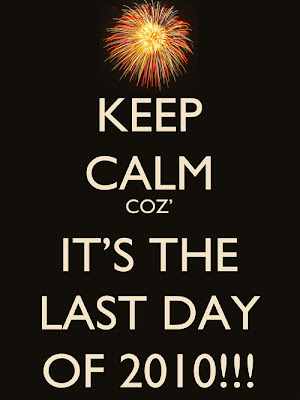 I am a man of action and I think a lot of this has to do with the fact that I'm not good at making long term plans. Here, I specifically mean New Year's Resolutions. Last year instead of writing resolutions for 2010, I wrote a list of my accomplishments for 2009.

So, instead of saying what I will do this year, I'm going to write about what I accomplished in 2010 and try to do better in the following year. Here are some of the accomplishments I am proud (and not so proud of) in 2010.

1. I wrote 660 posts for Seoul Eats
2. Am the weekly food columnist for Arirang Radio's The Way Home
3. Left Groove Magazine and became the Dining Editor for Seoul Magazine
4. Wore out my favorite pair of shoes at and had to walk home with one shoe (I also left my wallet).
5. Became a partner at O'ngo Food Communications
6. Started a successful culinary tourism business and Korean cooking Classes.
7. Was invited by the International Culinary Tourism Association to be a speaker at the conference in Nova Scotia.
8. Gave my dog Hubble back to the previous owner (I'm very sad about this, but we had to do what was best for Hubble since I am a workaholic).
9. Was invited by Korea Air to write an article on Pohang Dried Mackerel
10. Wrote an article for Plate Magazine on Korean Noodles
11. Brought Chandra Ram Editor-in-chief of Plate magazine over to Korea for a Fam Tour!
12. Finally got to meet Mr. Erik Wolf, president of the International Culinary Tourism Association
13. Got to talk with my foodie hero Ruth Reichel.
14. Made the first iPhone Food Appliciation: K-Food Korean Food Dictionary
15. Gained another 10 pounds.
16. Met Chef Tommy Staubber at Polo Bar and Grill in Florida
17. Met Dorothy Hamilton of the French Culinary Institute and learned very funny things about Julia Child
18. Organized and ran a culinary tour for KTO
19. Consulted Frappe Entertainment and became the researcher for the Kimchi Chronicles and will appear as a guest on the show.
20. Wrote an article for Monocle Magazine
21. Helped with Seoul Gourmet 2010
22. Was in 3 failed relationships (It was me not them).
23. Ran a culinary tour for Heather Graham!
24. O'ngo headed the marketing campaign for Koreataste.org and gave the top prize of a culinary vacation in Seoul.
25. Made good friends.
26. Ate at too many restaurants.
27. Got over my hatred of skate.
28. Signed a book deal (more news on this later).

Come take a cooking class or take a Culinary Tour in Seoul! http://www.ongofood.com
Pictures are taken either with my Panasonic DMC-G2 Camera with 20mm Lens or with my iPhone 4G
2010 2011 accomplishments