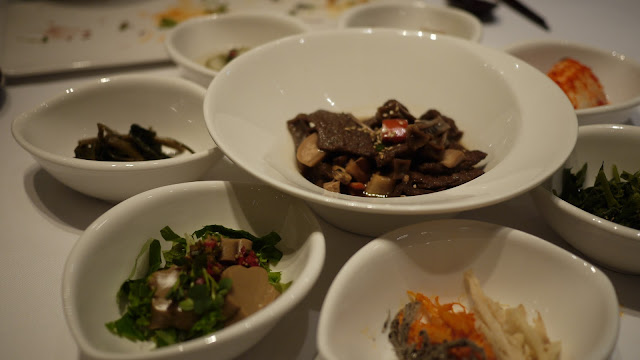 With all the talk over the years about the issue of Korean Food Globalization, the new issue seems to be over side dishes or known as banchan. Sides have been drawn and there are those that believe that the side dishes should remain complementary and others that believe they should be charged for- therefore adding value to the meal. Before diving into the issue, I think we should (and I think we always should try to look at it from an outsider's perspective).

As a person that works in the food and tourism industry, our company meets hundreds of tourists each month as we introduce them to Korean food. We get many international clients, for example on the last tour we had an American, a German, two New Zealanders, and three Singaporeans. Each of them had different ideas of "service" and "cuisine" but the most interesting perspective was that of "value."

Of course, I am not trying to stereotype any of these clients- this is just an observation I had. Our German client was fascinated with the sauce that we got with our tofu and kimchi dish. After she finished the sauce, I offered to get more sauce for her, she kept refusing and then asked, "if it is not too expensive, that's fine- I'll take more." I told her that there is not a charge for extra sauce. My American and New Zealand clients said, "Really? Then...we'll take some more too. It is sooo good. I could just eat the sauce." The waitress came from kitchen and refilled everyone's sauce at the table and everyone thanked her profusely. Afterwards, I noticed that the Americans had slipped 2,000 won under their cups as a tip. Hmmm...if my guests place so much value on sauce, then I think the value on banchan would be much higher.

At the barbecue restaurant we went to, several of my guests was in love with the macaroni salad. Of course, this was not a traditional side dish, but they ate 2 bowls of it before the server realized it. She then came around and gave everyone at the table their own individual bowl of macaroni salad. Everyone was tremendously impressed and afterwards each guest left a 1000 won tip for the server. Of course, I had told them that it is not common to tip in Korea, but they did so regardless. After we had left, the server that gave us the macaroni salad chased after us with the money in her hands. She pleaded with me to take it back. I told her it was a gift, but she still wouldn't take the money. I explained to her that my guests were so impressed with her service, that it was a tip. A tip was a foreign concept for her. She asked us to wait one moment. She ran back into the restaurant and came back with a bottle of cola for each of my guests-the coke worth more than the money we left her. We had to accept this and we were off.

Please go to Koreataste.org to read the rest of the article : http://www.koreataste.org/lang/en/en/magazine-en/columns-en/column-korean-perceptions-of-service-must-change/

This is not the first time, I have had this happen. On rainy days, I often will tip a taxi driver some extra money as a thank you for picking me up. Taxi drivers will refuse and some have even scolded me for offering the money. Many Koreans feel the money is a bribe and only the unscrupulous would take it.

Korean perceptions of "service" must change and not just in the restaurants. Korean people work so hard and yet many of them feel that more work is the reward. A famous restaurant is often the restaurant that is the busiest. The make money from quantity versus quality. Often these are restaurants that have to maintain a breakneck pace that are almost like an assembly line. Koreans love the ideas of "fast" and "completion." In the hospitality industry, these are important elements but so is friendliness, environment, and "service." I quote service here, for the concept for service in many cultures is different from that in Korea. "Service" in Korea means that you get your food and you get more food- often in the form of higher value side-dishes such as broiled fish or crab. Service does not mean that the waiter is polite and attentive or predicts a need you might have such as extra tissues if you drop something on your pants or water if it looks like you ate something spicy. "Servers" in Korea are often thought of as deliverers of food and not much else. Korean people go to eat with their friends to build up connections with those sitting at the table and they wouldn't want to be interrupted by the "service."

I grew up working in the hospitality industry in America where service was valued. People would tip based on how friendly, polite, knowledgable, earnest, and interesting the server was. The server was a representative of the restaurant, therefore, part of the show. Customers can eat anywhere, but they go to restaurants for the experience and entertainment- two other things that Korean restaurants also tremendously undervalue.

From my observations, I feel that Korean people place value on "quantity." They place value on being full, both mentally and physically. They often feel that more food there is to see, the more important they feel. Many Korean people feel that it is the restaurant's "noblesse oblige" to offer vast quantities of food with complementary refills for little money. I believe that this perception is the cause of many excellent Korean restaurants closing and being replaced with high margin eateries such as cafes and fast food establishments.

Let's look at the restaurant Myeongdong Gyoza. This is the quintessential example of a well-oiled, efficient restaurant in Korea. This restaurant is famous for their dumplings and knife-cut noodle soup.  There are two locations in Myeongdong (and many, many imitators). There is always a line out the door. Once you sit down, you must order and pay. The food then arrives minutes later. They offer blistering spicy kimchi, a mint, and a little side of rice as the side dishes and nothing else. The cost per bowl is 8,000 won- more expensive than any other knife-cut noodle place in Korea. It seems like a success, but the value based on quantity is not lost. If a customer eats all of the noodles in their bowl, the servers will come over and refill their bowl, again, value being placed on being full rather than the delicious broth, excellent noodles, and handmade dumplings. I mean does the restaurant really need to give complementary "service" to give their diner's a excellent dining experience?

I don't think so.

If we want to maintain Korean food culture, than we need to value it properly. Food should be valued. The farmers who make it and the people that prepare it should be respected. We should not just gorge ourselves and pay a pittance for what it is worth. Each small side dish on a Korean table takes time to prepare and they should be valued. If we do not show respect to our cuisine, there will only be high-margin restaurants, fast food eateries, and cafes. Good, healthy Korean restaurants will be choked out by rising food prices, high rent, and high labor.
globalization opinion service