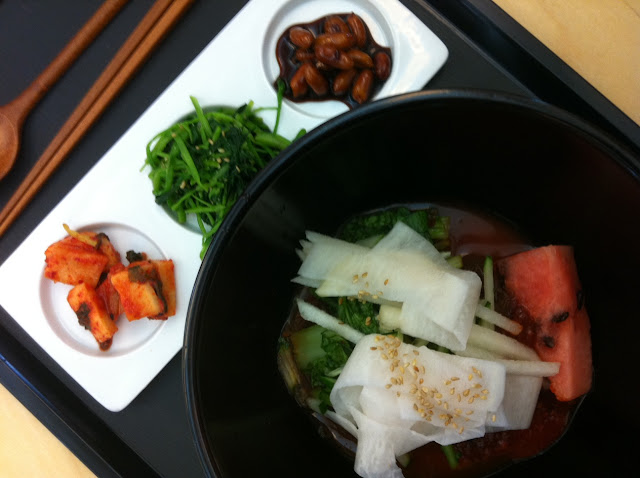 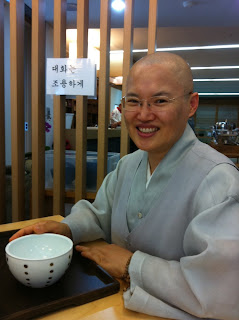 Who would have guessed that it would take a Buddhist Monk to rejuvenate Korean cuisine and make it popular to westerners and Koreans. Master Dae-Ahn of Balwoo restaurant is doing just that. The Jogeysa Order of Buddhist monks now has 3 restaurants in Seoul. Their flagship store Balwoo- across from Jogeysa temple is usually booked every day. I tried to get a reservation over the weekend and they told me that it was booked over a week ago.
The one criticism that many people had about the Balwoo Restaurant on the 5th floor was the price. With meals starting at 25,000 a person- it's not a place you can eat at regularly.
The humble monks realized this and then opened Balwoo Gongyang Kong on the 3rd floor of the same building. It is a Buddhist cafeteria style restaurant so it is self service but prices are modest (meals start at 6,000 won).  Oh, and you can only go up once- it's not an open buffet. You are also expected to eat modestly- don't go piling up your plate with a ton of food.  You are supposed to eat all the food that you eat on your plate, so it is important to be mindful of the amount that you take.
You can choose to go up and get the daily offering with rice or you can order a noodle dish. The day that i was there, I chose to get the Chilled Buckwheat Noodle Soup. Then I was given a small serving dish to get some banchan (some banchan...not too much).
The food is served buffet style. The open kitchen sits behind the serving table and there are all manner of serving ware. Actually, it is quite confusing. If you choose a plate if you would like or get the 4 Buddhist wooden bowls. With these one is for soup, one for rice and 2 for side dishes.
No one explains the order and if you aren't familiar with the temple style of eating, one could easily get confused. Although, I ordered the noodle soup, my two guests had already received theirs (they ordered noodles without the soup) and I had to wait about 10 minutes for mine. Also, there wasn't a ticketing system, so I didn't know when my order was up or not.
The restaurant is quite chaotic and they need to figure out a system.
On the other hand, the food is quite good. OK, it's not as good as the Balwoo upstairs or the new one (Gosang, I'll write about this later), but for the price it is excellent. It's also nice to know that everything is prepared temple style- so no meat, fish, or dairy. My noodle soup was flavorful and a tad spicy. I would say crisp and citrousy. The chewy noodles were perfect since it was hot outside. The side dishes were good as well, although I thought the beans were a bit mushy (for a place called Balwoo Gongyang Kong (bean) you would think they would do a better job with these). Overall, it's a healthy meal that you know is good for you.
Balwoo
02.2031.2081
Website: http://www.baru.or.kr
110-170 서울시 종로구 견지동 71번지 템플스테ㅣ 5층
71 Gyeonji-dong, Jongno-gu, Seoul 110-170
Directions: Near Anguk and Jonggak Stations, across from the big Jogyesa Temple in the Temple Stay Building, 5th floor. 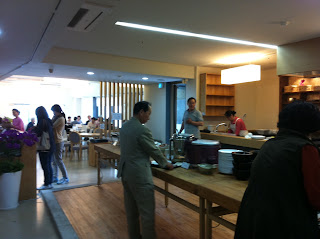 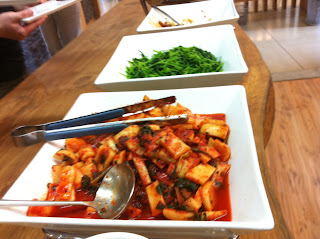 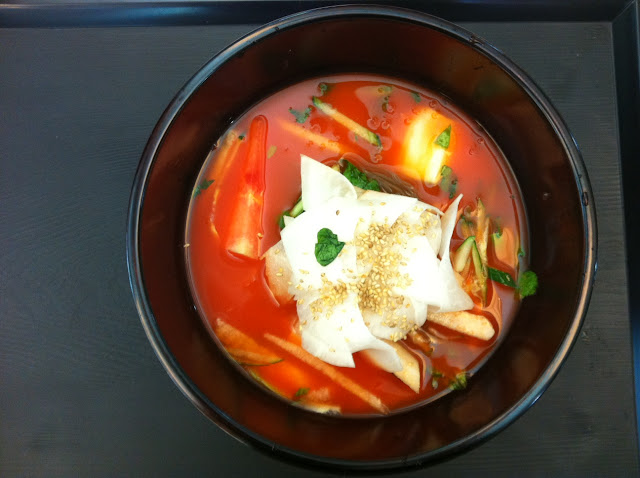