Lightning fast isn't that much of an exaggeration when describing how most things get done in Seoul. For the 10 million highly-wired, digitally connected and rigorously educated inhabitants of this frenetic metropolis, breakneck pace is the daily norm.

Seoul doesn't slow down for anyone, but this is probably why a war-torn Korea was able to pick itself up and become a global powerhouse in a matter of a few decades. Amidst the buzz of its cutting-edge IT developments, streamlined railways, or high-rise skyscrapers, it's hard to imagine today that Korea lived in sub-Saharan levels of poverty only a short while ago.

In search of ever faster ways to expedite processes and save time, Koreans are turning eagerly to one-stop multi-purpose complexes that combine department stores, supermarkets, bookstores, restaurants and theaters. Imagine being able to eat, shop, read, work, attend a concert, try hundreds of different street foods from all over the world, and even get a nose job, all in the same building complex.

In essence these herculean mega malls are triumphant monuments of the country's economic growth - a testament to the its meteoric rise out of the rubble - whose emergence is changing the way people are spending their time.
Mega-malls are sprouting like mushrooms, especially throughout Guro and Yeongdeung-po districts. The newest of the bunch is D-Cube City: A 19800 sq.m. comprehensive culture complex built by Dae Seong Group that offers just about everything a modern Seoulite will need.
Inside this massive space, one can shop at the D-Cube Department Store, featuring global brands (most of them never before seen in Korea) like H&amp;M, Zara, and UNIQLO. When all that shopping causes hunger and thirst, one can replenish at the theme restaurants which offer :0 over 4,000 different menus. 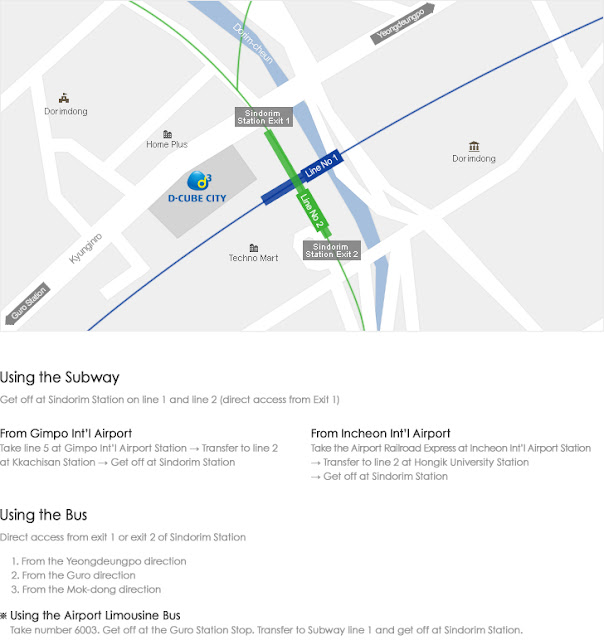 About the Author, Christine Park. After living in San Francisco, Paris and London, Christine Park returned home to Seoul. She joined O’ngo Food Communications from Ogilvy PR and brings marketing experience from an internship at Louis Vuitton Korea Ltd. Her love of food and art have sent her traveling all over the world in search of culinary adventures. Christine has an M.A. and B.A. in History of Art from University College London.

Pictures are taken either with my Panasonic DMC-G2 Camera with 20mm Lens or with my iPhone 4G
Join the Seoul Eats Facebook Group Page to keep to date with the latest events.