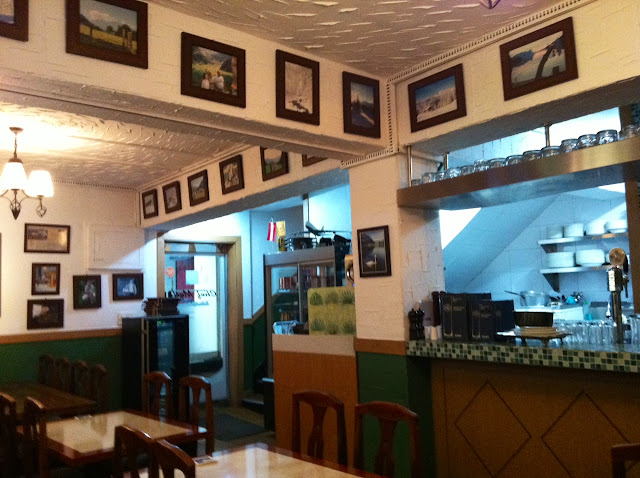 I don't know why but I had not been back to one of my old haunts in months. I had stopped in from time to time to get sausages at the deli, but I had not stopped in the restaurant in a while. On Sunday, one of my chef friends and I decided to explore non-Korean restaurants in the Itaewon area. My friend, Ulbee, works at a Korean restaurant so she wasn't in the mood to drink soju and have Korean food. Thank goodness because neither was I. Our first stop that evening was at Chef Meili's Austrian restaurant in Itaewon.

Chef Meili is known for his sausages and his Vienner Schnitzel and his gluhwein. I have indulged in his restaurant many times in the past (especially during the holiday seasons). I don't know why but his food reminds of my holidays back home.

Sure enough as soon as I stepped in, the chef, Christian Meilinger, was there to greet me. He is a big, boisterous guy and he said, "wow, it's a surprise to see you." We talked a bit and I sat with my friend. The restaurant at 7pm was a bit empty. There was only one other table sitting and I was wondering if the restaurant had lost some of the magic that made it popular. 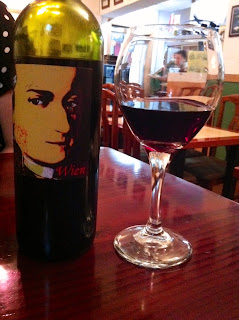 We perused the menu and decided on Chef Meili's sausage platter with potatoes and saurkraut (14,500 won) and a platter (sorry, I can't recall the name) that had a potato pancake like dish with pork medallions in a butter, cream sauce (26,000 won). With this we got a bottle of their Austrian red wine (40,000 won).

The atmosphere was quaint and so was the wine. It had a bit of tannin and a dark cherry finish. It was chilled slightly so it was very drinkable.

Oh, we started with a soup. It was a pork broth soup that had pork meatballs flavored with sauerkraut. It had some celery and carrots floating in the broth as well.

I thought it was fine, but Ulbee said that it was too salty. This started a conversation about if foreign food was too salty or not.

Then our first main course came out. The potato pancakes were delicious- crispy with a bit of oil and it was a hearty complement to the pork. The pork had a nice sauce, but it wasn't overly exciting. It was creamy and buttery and it went well when put on the pancake. I think it could have used a bit more pepper.
The star of the meal came next. You can always rely on the homemade sausages and sauerkraut at Chef Meili. They are pan-fried till they are crisp and the meat inside is flavorful and delicious. I think I could have eaten a whole plate full of the sausages. The sauerkraut was a nice complement to the savory meat. My favorite way to eat it was to stack a bit of each element: savory sausage, sour sauerkraut, a bit fried potato and onion, and a dollop of mustard. It is a perfect Sunday night dinner.