Review: Burger B: A Taste of Home in Hongdae

January 10, 2012
Yay, another review written by a user. I guess we have 4 people now in the running for a Valentine's Day Dinner. Here Cheeselover writes a review of Burger B in Hongdae. Submit your own review and get in the running to win a free dinner or dining tour for two here.
Review: Burger B: A Taste of Home in Hongdae
Written and Photographed by CheeseLover 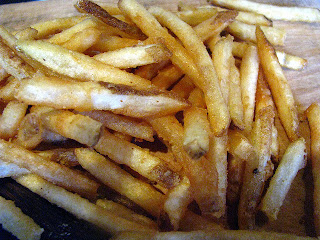 I love a good burger, and every once in a while I really get a craving for one. While walking around Hongdae one day, my boyfriend and I followed our noses to a restaurant called Burger B (it really does smell mouthwatering from even outside)
.
The first thing I noticed is that Burger B looks like a pub you could find in the USA-my home country. There's a jukebox in the corner, and those kind of kitschy decorations that are so familiar. Your utensils (knife and fork, no chopsticks here) come in a pail with some mustard and ketchup. There's also Guinness on tap as well as a few other decent beers.

The menu is in English first followed by a Korean translation. There's obviously a burger section, as well as salads, sandwiches, and snacks which are kind of your standard pub fare.

My boyfriend was intrigued by the Ultimate Burger, one that came topped with truffle aioli, Gruyere cheese, and caramelized onions, with a shot of vanilla milkshake and French fries on the side. I ordered the Gorgonzola Burger which has arugula, pesto aioli, Gorgonzola cheese, and mushrooms.


The food was as good as it smelled and looked. Though, like most places in Korea, you couldn't choose how your burger was cooked, it came with a tiny touch of pink and was still quite juicy. The beef is clearly high quality and the toppings were fresh and delicious. The bun was good and plenty sturdy for the burger. The taste of milkshake we got told us they are quite good here as well. The fries weren't exactly hot when they came out, but were somehow still tasty (I like shoestring fries, and they were crispy and salty).

I wouldn't say the service was anything special, although most of the servers speak English well, and both times we've been the person at the cashier was very friendly and struck up a nice conversation with us.
Surprisingly both times there were few other foreigners in the restaurant. It wasn't too crowded either time but it wasn't empty either.
If you're looking for a delicious burger - the best I've had in Seoul so far, and better than many American burgers too - look no further than Burger B in Hongdae."