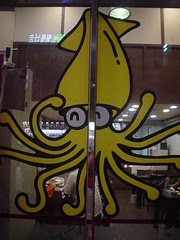 You might think this is strange, but the ________family lives in a giant mushroom. Don't worry, it's a big mushroom and the walls are strong and there is a big fireplace so everyone stays warm.

Today it is snowing outside so the _________family stayed inside their warm, nice, mushroom house.

Grandma ________decided to make bibimbap for her family. It's a very special bibimbap because it is made with apples, lollipops, chocolate, sausage and seol sa yak. I know it sounds strange but everyone in the _________family likes it.

Outside Ojingo and Domingo were walking in the snow when they smelled Grandma _________special bibimbap.

Everyone in the mushroom house sat around the kitchen table so hungry for the bibimbap grandma made.

Everyone looked at Grandpa and said ewwweh!

I have to teach now so I'll have to finish this story later.