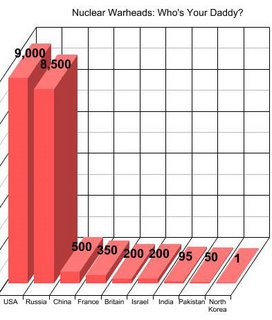 So...how do I feel about Kim Jong-il and his kookie North Korean Comedic Communist Regime?

Yes. They've got the bomb, but they only have "one" and it wouldn't be advantageous to attack anyone. I think the bomb is only purpose is to strengthen Jong-il's weakening regime in his own country. It's a symbolic bomb, not an actual bomb. Propoganda can feed a person, right? I have other thoughts, but I have to get ready for school now.