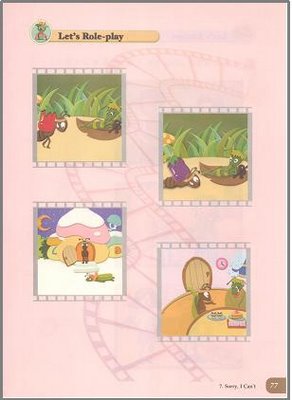 I love doing role plays in class. I simply try to make as many roles as possible and get the kids to act it out. I find it is best to first show a short clip of what you're going to act out, play it 2 or 3 times and then get the kids to help write the dialogue on the board. Then I give out parts. Usually I pick the most animated and/or popular kids in class to do it first.

I know that sounds awful but it's all psychology. If I pick them first then it will get kids excited and they will pay attention. I noticed that if I pick the unpopular kids or the kids that the other kids deem "crazy" then I won't be able to replay the play more than once and I spend the time yelling at everyone to simply be quiet!

The students really like it when the ant has to carry the vegetables and the grasshopper acts all lazy and such.

I recommend you do this play with an all girl cast first, because they'll make it fun, but not out of control and then do it with an all boy cast. If you mix them up the boys don't want to touch the girls and vice versa and it takes the whole fun out of the play and it inhibits children from wanting to participate because they don't want to act out the play with the opposite sex.