Casino Royale: A rollercoaster thrill ride but strangely reminiscent of a video game!?! 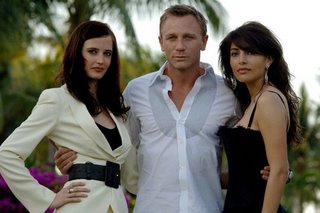 The opening chase sequence between James Bond and a terrorist bomb maker is mind boggling. The physical interchange between Bond and the bomb maker is a refreshing way to reveal character traits. This Bond is shown to be a raw, impulsive man, with excellent instincts that uses his intelligence and drive to defeat his superior foe. He is razor sharp and very cold and this new Bond (who is actually the old Bond.) lets his actions speak instead of catchy one liners.

This isn't the suave bond of the past. He is raw and the movie has a feel more like the Bourne Identity than the Pierce Bronson Bond we've come know and possibly become disillusioned with.

Eva Green was sweet and sultry but of course she couldn't be the virtuous girl that takes Bond away from the spy life, no, no, no. Of course she has an ulterior motive for loving Bond. The villian was just so, so and wasn't over the top like others and this Bond movie seemed like a "who's done it." at times.

Oh, the other Bond girl (the darker, lovelier one in the picture above) was smoking!

One last thing. There was a part of the movie that went with a 1st person shooting perspective and the scenes seemed too familiar to James Bond's Goldeneye N64 video game. It didn't even look like a homage- just straight piracy.

I would still recommend everyone to see it and the future of this franchise looks bright.