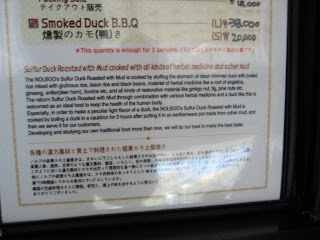 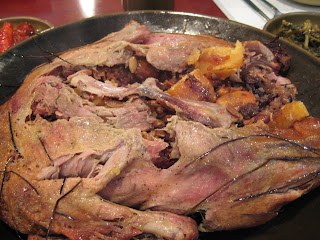 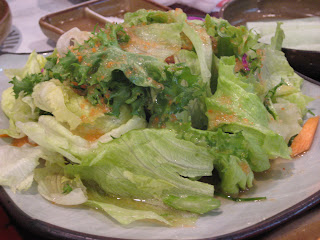 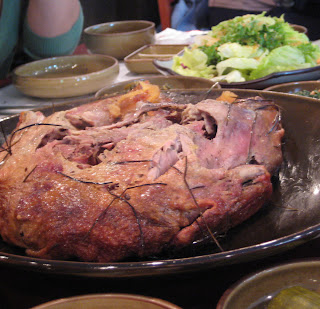 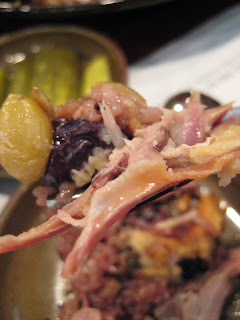 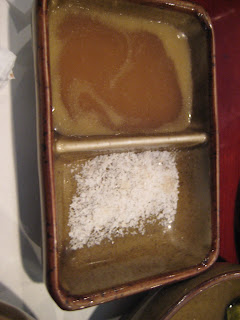 Behind the Express Bus terminal in Seoul, next to the Marriot Hotel, there is a Nolboo restaurant that serves "Sulfur Duck Roasted in Mud." It is called the 놀부 유화오리 진홁구이. At this restaurant you get duck that's fed sulfur and then stuffed with sticky brown rice, black rice, sweet potato, beans, ginko, dae-chu (it's a Korean plum), deer antler!, ginseng, licorice, angelica, and who knows what else.

The reasoning behind the sulfur is: the direct contact with sulfur is a dangerous substance for all mammals other than ducks. I can't really explain it. Here's what I got from another blog,

"According to a widely believed oriental medical theory, sulfur can be super healthy for human body. It is because, as the theory goes, ducks’ bodies produce a lot of good elements that counteract the effects of sulfur, which neutralize in human bodies as well as working against polluting elements."

Yeah, I don't know. It sounds a wee bit like fan death to me. I will tell you one thing, I've had a lot of good luck since I've had the duck. I'm not sure if they're related, but my Korean friends sure think so. They believe that my constitution (and they mean this in the most banal way) creates my present reality.

The taste: The duck meat was succulent and the texture was like Cuban pork that was roasted all day. But it needed salt. Also the skin, which should have been Peking crispy was soggy along the bottom of the dish. The rice and herbs inside had a medicinal bouquet- as if a cool breeze wafted through the Oriental medicine clinic; it wasn't over powering. But then again, it wasn't very welcoming either. The smell itself wouldn't have drawn me to this dish.

It was like the after Valentine's box of mixed chocolates from the Chocolatier; you never know what you're going to get- but you know it's going to be the awkward Valentine experiments gone bad. Also, trying to get some rice and then finding little bits of duck bones jettisoned inside doesn't make for good eats.

I am being too harsh. If you took the duck meat and dipped in the salt, it was nice- but I'm American, I don't want to have to season my own food. The other sauce that came with it- a sweet, mustardly, vinegar was also a nice complement to the duck meat as well. The pancheon (the Korean sidedishes) were not spectacular, but I did enjoy the crisp salad served with a ginger, carrot dressing. They did lose credibility when they tried to pass off jalepenos and onions as pancheon. Oh, I didn't like how almost immediately we were sat, we were served. They didn't even ask what we wanted to order, but then again, there was only one thing on the lunch menu. I would like to settle and get used to my surroundings before I'm served. That wasn't the case here.

Would I go again? Probably not, but it was an interesting experience. It wasn't inedible, but it would take a lot more than sugar to make this medicine go down.