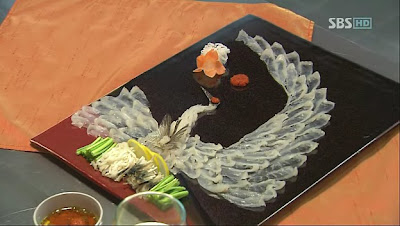 This post is from Dramabeans and it's an excellent blog if you want to learn about what's happening in Korean Dramas.

Gourmet is a really good show.

But it’s not just about food. Obviously, the plot IS food-related, but Gourmet doesn’t forget that at the heart of any successful drama is the ability to draw upon its characters and create emotional moments, and it accomplishes that. Kim Rae-won is wonderful in his role, and does a lovely, layered job portraying depth to his good-natured character. While the drama starts with a slow build, I found that I liked it more and more as I kept going.

Rather than do strict episode-by-episode recaps, I’ve kinda thrown everything together into a four-episode analysis, with some summarizing in there as well. It seemed appropriate — because while the initial plot is pretty straightforward for these first four hours, Gourmet’s strength isn’t in the mere plot points themselves but in the underlying themes that support them.