Review of PyungYangJip by Mandy 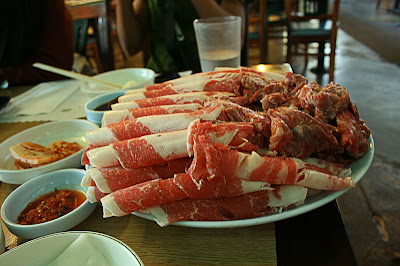 This restaurant looks very humble and modest though many people love its chadolbaki(marbling meat from brisket of beef) and naejangtang(soup with small intestines of beef).

Among numerous chadolbaki restaurants near samgakji station , there is a relatively new blue signboard that reads 'PyungYangjip'.Though the signboard is new, this restaurant has served food since the Korean war, you could see many old grandfather regulars and even the very famous chairman of Korean conglomerate lets his secretary buy meals for him regularly here.

Only two side dishes are served and the price of menu isn't very friendly(one portion(170g) of chadolbaki is 21,000 won, naejangtang is 6,000 won). The place is small but climbing up the steep staircases, you can find larger hall. The hall is bit messy and noisy, you may have to yell to waitresses to place your order sometimes. Still the regulars don't mind to come to this place to taste its food.

The peppers in the soy sauce make meat less fatty and give a fresh taste. The Chadolbaki is very chewy, slightly savory.
Two side dishes, cabbage and kkakduki(cubed radish kimchi) are very simple but tasty. Cabbage with dash of gochujang(Red pepper paste) is surprisingly sweet and kkakduki is also near to sweet than spicy.
If you feel half full from the chadolbaki, it's time to order naejangtang or yangbap(fried rice with small intestines, large enough for two people).
I prefer yangbap, still most of my ajussi colleagues like naejangtang.