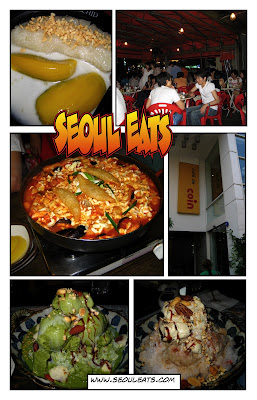 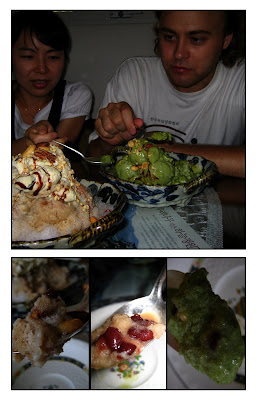 Our mission to find the best patbingsu in Korea was a success. We started out the day at 먹쉬돈나 (mok schwei don na) which translates to Eat, relax, pay and go for Dukbokki. He had the Seafood, cheese, noodle, and ugly dumpling ( 못난이) dukkbokki and it was outstanding. It came served in a big communal bowl and it was comfortably spicy. The dukkboki sauce was delicious- not too sweet or spicy.

Then to wash this down we went to Cafe de coin which is up the street. There we got the large green tea patbingsu and the blackbean patbingsu. Ok, I'm very particular when it comes to my Korean sundae. I don't like all the goop they put in there. I like a centralized taste. The green tea patbingsu had ample amounts of red bean, almonds, peanuts, green tea icecream and rice cakes. It was one of the best ones I've had.

The black bean patbingsu took the take. I figured it would have black beans or black sesame beans, but it had the distinct flavor of coffee. It was like an iced frappucino with sugared pecans, vanilla icecream, rice cake, cinnamon, and chocolate syrup. It is a patbingsu for grown up tastes.

You can get to Samcheongdong by going out Anguk station exit 1 and making a right the Korean Travel Bureau building and walk up along the stone wall.