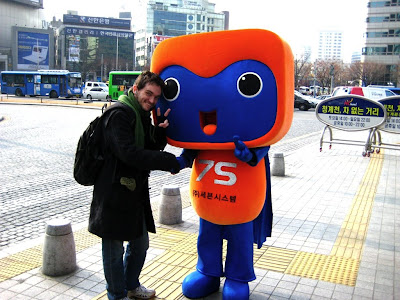 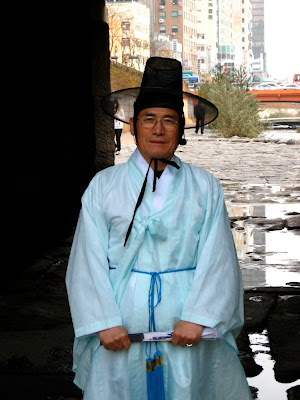 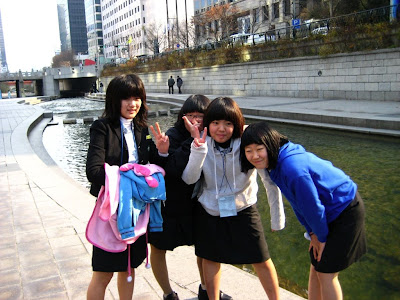 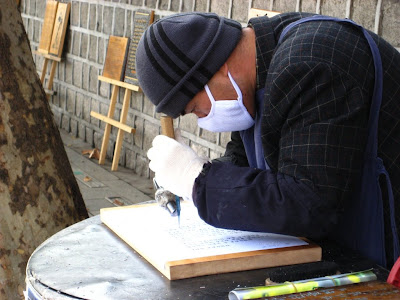 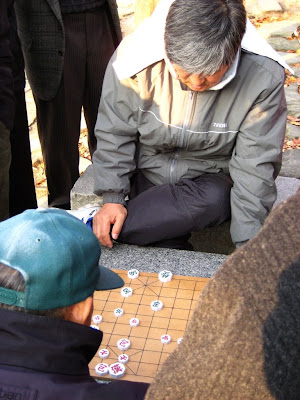 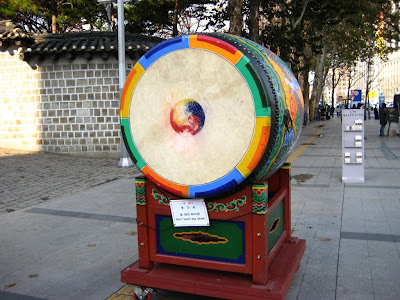 While you are in Seoul you should take the Palace/Gyeonggye tour. It is something that I had always looked forward to doing because I am a huge fan of Korean history and architecture. So, I dressed warmly, grabbed my trusty camera, and headed out to Gwanghwamun station to catch the city tour bus.

First, I had to take the subway (Purple/ Line 5) to the Gwanghwamun Station exit six. I walked down the street toward city hall and found the Dongwha Duty Free Shop where I bought my ticket. You can also buy your tickets directly on the bus when you enter. While I was waiting for my bus to depart, I walked further down the street and bought some roasted chestnuts from a friendly vendor on the street for 1,500 won. These were delicious and the perfect thing to get rid of the winter chill.

I continued to walk until I found a craftsman in front of Deoksugang Palace. He was hand-carving wood with Korean symbols that translated into famous quotations and the history of this palace. The attention to detail in his work was really amazing. I was heading to Deoksugang Palace to catch the ceremonial changing of the guards. Unfortunately, I did not arrive at the palace on time. The standard times for viewing this delightful ceremony are at 11:00AM, 14:00PM, and 15:30PM. This ceremony is free for viewers and the entrance fee for the palace is 1,000Won.

My next adventure was taking a walk down the Cheonggyecheon River and enjoying the sights with the many others doing the same. Today, I ran into a young man in robot suit advertising a bank company (I believe.) He was very entertaining and social with the pedestrians. Then as I entered the river I began to look at a display of black and white photographs set up to commemorate the Korean Conflict. Many people were out viewing the photos and they help us to understand the difficult past. I continued my walk down the river and met a man that was dressed in a traditional Korean outfit telling those walking along the river about its past history. I then ran into a large group of high school students that were on a field trip for the day.

They were standing around the river talking, some had their shoes off and were soaking there feet in the river.

When I got close to the students they were very eager to say hello and ask what country I was from. I told them I was from the US and they became very excited. As we talked more they really wanted me to take their picture and they started posing and being silly.

I continued to walk down the river and eventually ended up around Dongdaemun Gate and Shopping Market. The sheer number of vendors with products ranging from clothes to furniture to all-purpose goods is overwhelming. Then when you start shopping along side so many other shoppers, it makes Dongdaemun a very unique experience. I ran into a university student that wanted to ask me questions for a class survey. I agreed because I had time and I find it fun to meet students and learn about what they are studying. She was also funny because I asked her four times if I could take her picture, but she refused saying she was too shy. I didn’t understand how she was so shy if she’s asking so many people to take her survey.

I then ended up getting on the tour bus and continued the Palace tour to Changgyeonggung Palace. The palace is located not far from Hyewha Station.

I then walked to Changdeokgung Palace, which is not far from Insadong and central downtown. Very close to the palace I found a group of elderly Korean men playing Baduk. Two men were playing, but many others had gathered around to watch as they played. The palace seemed to be a popular area for visiting and for social gathering.

The Seoul City Palace tour was very nice because I wasn’t aware of many of the palaces that are a little further out of the downtown area. Each palace has its own personality and has its own purpose within Seoul that makes them all very special.

The Palace Tour of Seoul City Tour Bus begins it run at 10AM and ends at 5PM everyday except for Mondays(unless the Monday is a holiday then there is normal service). The tour runs one and a half hours when you ride the bus straight through. If you decide to get off and visit certain stops then you can get back on the bus every hour.

The palace tour runs a double-decker bus, unlike the downtown tour which a single level bus. The cost of the tour is 12,000Won for adults and 8,000Won for children between 6 and 13. A 10% discount is offered for groups of 10 or more and 5% discount is available for T Money Card users. The phone number to call the Seoul City Tour Bus Office is