Eating in the Philippines

So, my boyfriend, Jay, was supposed to come and visit me in Korea. But, even though he's a permanent resident of the U.S., they wouldn't let him into Korea because his passport says "Pilipinas Pasaporte." Thus, I found myself in the Philippines for the last couple weeks!! Thought I would share some food pics with you all just in case you are thinking of journeying off to some sunny white beaches yourselves!

If you want to know the whole story, check out my blog. Let's just say everything happens for a reason.

Some of the delicious foods I tried in the PI: 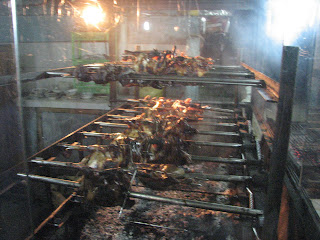 Every part of a chicken you would ever want to eat (neck, intestines, hearts, livers): 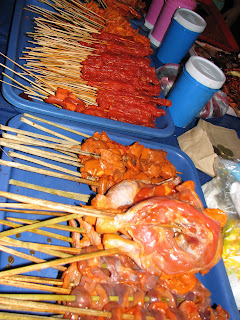 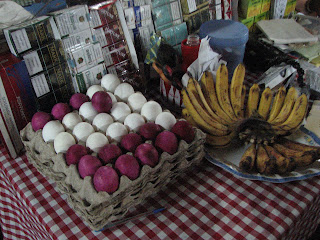 A typical meal at the beach: fire-roasted fish, pork belly similar to sam gyeop sal, plenty of coke, and Tanduay rum (80%--pretty much rubbing alcohol) and a banana leaf served as the tablecloth: 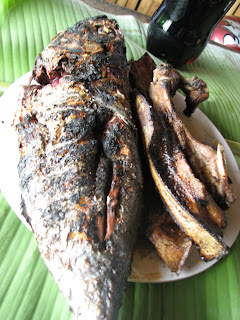 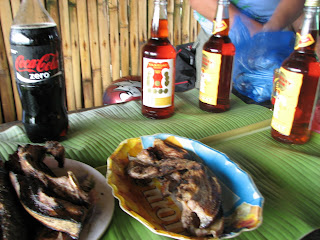 AND, the KING of all Filipino dishes, lechon (a whole pig roasted over a fire very slowly for upwards of 6 hours or so): 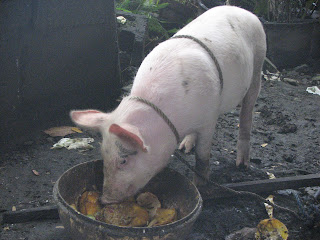 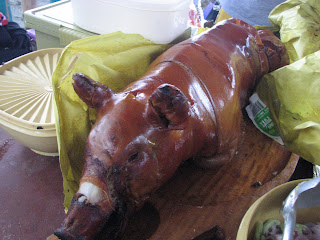 Labor is cheap in the Philippines. One of these whole-roasted pigs in the States costs about $300, and you have to get it from someone who does it underground as this type of thing cannot be found at any restaurant. Instead, one must order it from a Filipino family running an illegal lechon-roasting business from their basement. We paid the equivalent of about $40 for our pig. We bought it live, and had it killed. Then, we paid someone to roast it. I doubt if the whole process (including the pig) cost more than $50.

If any of you are readers of Michael Pollan's books, you will recognize the difference in the way food is treated simply by these pictures alone. Personally, it was a refreshing (and revolting) experience to see all of my food nearly killed right before my eyes. It's not a place with those who have faint stomachs and can't deal with seeing their meat processed right in front of them. I felt that it was necessary to have an experience where I actually see where my food comes from.

As dumb as it sounds, I didn't realize there were different types of rice in Asia. Korean rice is a short-grain rice that, depending on who you talk to, has a flavor and an aroma to it. Filipino rice is a long-grain rice that is much blander in comparison. Perhaps this is part of the reason for the differences in the two cuisines. Filipinos tend to pour on the salt, vinegar, soy, and fry most of their foods. Though delicious, it was easy for me to see why the country has an epidemic of heart disease and diabetes. Though Korean food is spicy, it doesn't even come close to the amount of fat in the Filipino dishes. I wonder if this has anything to do with the flavor of the accompanying rice--more fatty dishes with bland rice, less with flavorful rice? Just a theory I guess... then again, I have to remember that because of the extremely poor economy, usually the cheapest/most frequent dishes are the worst for your health. On the other hand, only the rich can afford to drink Coke in the Philippines... so it's a kind of damned if you do, damned if you don't type of thing...

Overall, my taste buds got a "kick" so to speak and it was nice to eat some stuff that wasn't so spicy. If you are planning on going to the Philippines, prepared to be treated like royalty. I was, and it was pretty dang nice (oh yeah, the hot weather was lovely too!!). *(^_^)*

If you want to know more about Filipino culture and my experience there, check out the whole story on my blog. Happy Eating!
Email Post
Labels: Filipino cuisine Philippines