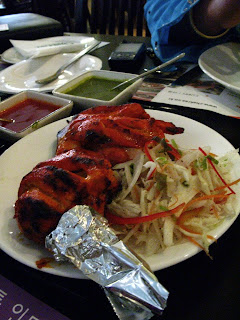 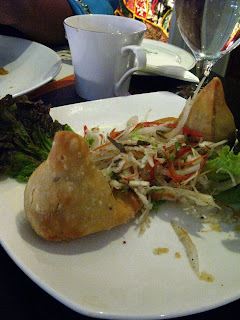 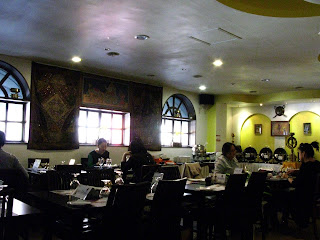 Today was a very fun day. I got to go talk to Shanthi, who is the owner of the Chakraa Indian restaurant chain. She was very kind and very fun to talk to. We were talking about food and I asked her how people from India felt about the food and she said that most Indian people can't eat it because it tastes too spicy or it tastes too much like meat.

Tastes too much like meat? That's something that seems a bit odd. I mean what is meat supposed to taste like?

Shanthi explained that Indian people marinate meat in various spices and yogurts to specifically get rid of the smell of meat. She said the taste of meat is offensive to many traditional Indians. She said many people are vegetarian because of their religion and even the smell might offend them.

Naan, the traditional bread, must be made in a special round oven. The oven stands upright and the leavened and pulled naan is stuck to the sides of the pot. The rising heat gives the naan a crisp fluffy texture. There is only one problem...

I don't know about you, but my oven is a box oven.

Shanthi had a solution. She said that some people make naan in those big kimchi pots by putting hot charcoal in the bottom of the kimchi pot.

Pretty cool stuff. I'm going to have to give it a try. Thanks Shanthi for lunch and the tip.