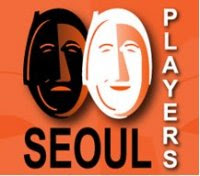 (SEOUL - May 6, 2009) – Seoul Players invites the English-speaking community to peer into the private lives of celebrities through Doris, a successful tabloid news journalist played by Desiree Munro of Australia, who does whatever it takes to hunt the famous down and publicize their most embarrassing details. Seoul Players, now in its eighth production year, is staging its 14th production, Silly Cow written by Ben Elton, which opens Saturday, May 30 and continues through June 13, 2009 at Phillie’s Basement in Haebangchon.

“This is my first production with Seoul Players,” said Munro, “I couldn’t be more thrilled to play a queen of tabloids. Britney Spears probably wouldn’t stand a chance if she ever came head-to-head with her!”

All actors volunteer their time for rehearsals and show dates – a commitment that has extended to a six-week rehearsal schedule, plus three weeks of performances. The cast and crew come from all corners of the world, including Korea, South Africa, USA, Canada, UK and Australia. The love of theatre is the one thing they all have in common.

“I was looking for an opportunity to act,” said Gef Somervell, a UK native, who plays Sydney in Silly Cow. “Seoul Players provides a great life-line for people looking to get involved in theatre, especially when they have a background from back home.” Somervell’s interest in drama began almost 20 years ago, while studying at Rose Buford College, a performing arts school in the UK.

Come and join Seoul Players for this delightful comedy and meet the various characters in Doris’s life that give new meaning to the word ‘dysfunctional.’ Seoul Players recommends to reserve tickets early at seoulplayers@gmail.com to avoid disappointment. Visit www.seoulplayers.com for more information. It’s a show you won’t want to miss!