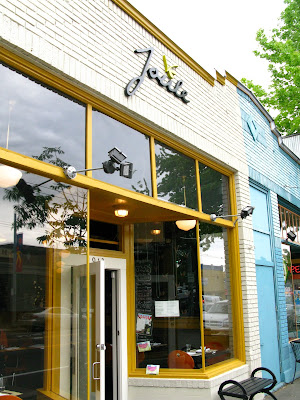 I know. I talk about Rachel Yang and Joule all the time and it's because they are both awesome. On my food tour of the United States, I had to make sure that I stopped by her restaurant in the Wallingford district of Seattle. So on my first Friday in Seattle, I went there with my kind hosts Noah and Beth and Paula and her husband, Wayne.

The restaurant stands out but in a whimsical way in the historical district. Wallingford is home to ironical Gas Works Park. The restaurant is quaint, inviting, and energetic. It's a place you can take a boring date to and not get bored. What was that? I mean the open kitchen with Rachel zipping around cooking and her large, friendly husband: Seif, striking up conversations with guests, you simply can’t get bored. Joule has a family feel to it; if you had a hip aunt and uncle in your family.

Now for what you've been waiting for: the food.

We started out with a Kimchi Pancake and the Smoked tofu with honshimeji confit, and soy-truffle vinaigrette. The crispy, sour kimchi pancake got our stomachs growling and then we felt our consciousness lifted by the sophisticated tofu dish. The tiny honshimeji confit were the perfect sponges to soak up the full truffle and soy flavor. The porous tofu was perfectly perfumed with smoke and the rich truffle/ soy taste. Yum.

When the waitress asked us to order I simply said, "Rachel can serve us whatever she would like." If there is a chef you trust, then this is the best thing you can do. You never know what you are going to get, but it is sure to be good.

First up was her cornbread with garlic and smoked Gouda. This was the first grand slam of the day. The American twist of using corn bread instead of polenta made this dish a homey comfort food that I could have simply eaten all day. Noah and everyone else agreed with me. We tried to be considerate of others as we took fork fulls, but we all wanted that dish for ourselves.

Next came the soups. There was a buttery yukgyejang (a spicy beef soup) and a cool soy vichysoisse. The vichysoisse, I believe, was made with soy milk. So it became like the Korean Kongguksu: a cold soy milk based noodle dish. The poached shrimp, crisp vegetables and hint of chili oil made this a Rachel Yang creation. 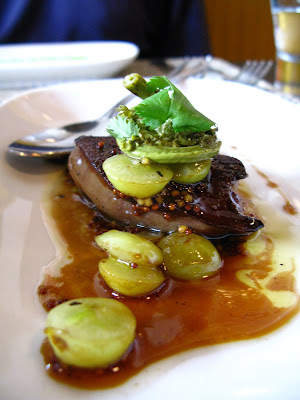 Then our table was flooded with different dishes. Up came the foie gras with a dijon vingarette, edamane, and topped with fennel brake. The foie gras had a crispiest crust that I have seen on a duck liver and I loved the edamane. Oh, and this dish was off menu- it's good to have friends.

Up came a crusty Baguette with homemade butters: a regular butter, a seaweed butter, sea salt butter. The seaweed butter was my favorite. It just made me scream umai.

There was a whole blackened mackerel with a daikon salad.

A kasu brined pork chop with spicy mustard that was tender and flavorful.

A lively looking octopus came to the table with it’s legs flayed in a fierce looking red sauce. 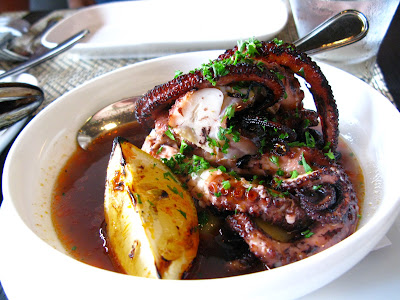 Then came Korean Rice cake, or mochi, with oxtail ragout, baby kale, and soy cured egg. This was followed by Rachel’s signature “mac and cheese” with black sesame spaetzel and black truffle oil. Oh, and there was rice, Cucumber Kimchi and Pickled Beef Tongue.

Whew…we had a lot of food but it wasn’t work getting through it.

The Korean Mochi was a big hit for all and everyone’s forks kept on returning to that dish. The octopus looked a bit intimidating, but as soon as I took a dive in everyone followed suit. Paula and Wayne who prefer not to eat spicy dishes even liked this dish. The red sauce had flavor but not a lot of heat. Beth, who is an adventurous eater said, "The Octopus was so tender!"

The whole mackerel looked so perfect on the plate that no one wanted to cut it up, but as soon as Noah started to fillet it up, everyone enjoyed it. Mackerel is one of my favorite kinds of fish because it has a dark, rich flavor. Growing up in Korea, this was the fish that I would ask mother for every day. 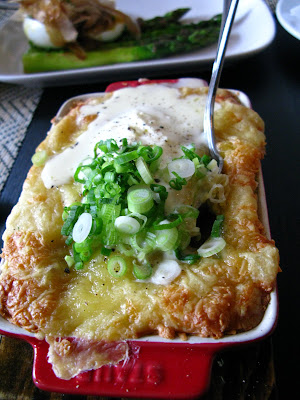 The Mac and Cheese was my favorite dish and I appreciated Rachel’s heavy hand on the black truffle oil. It’s as very Yin and Yang dish because the nutty, haunting taste of truffle oil contrasted the light spaetzel and cheese. Yum, Yum.

As you probably guessed, we didn’t have room for dessert.

Eating at Joule is a fun experience. You really get to learn about your companion’s tastes and preferences. It is an adventure to eat there and I suggest you get dishes to share. Rachel and Siv are artisans. They approach their patrons and their dishes with compassion and flair. It’s also a place that is vastly under priced for what you get. Rachel and Sief are both world-class chefs that work Joule most nights by themselves. Rachel has won numerous awards for her cooking and her dishes have been featured in Food and Wine, the Wall Street Journal, most of the Seattle publications, and I heard she has been invited by Gourmet Magazine to a cooking event. Sief has also won numerous awards and he has worked under many of the most skilled chefs in America. Yeah. You’ve gotta go, so get going. 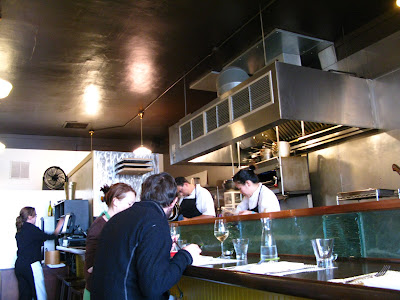