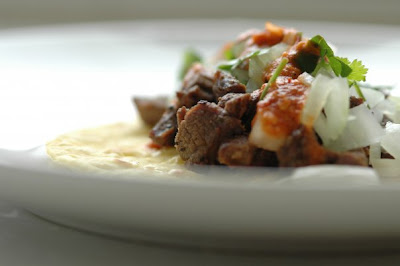 Ask 10 North Americans living here which national cuisine they miss the most from home, and it’s a good bet 8 or 9 of them will say Mexican. Mexican food may not offer the widest range of flavors or ingredients – basically, we’re talking a few different meats presented in corn tortillas of varying hardness – but it’s certainly an easy one to mess up. “Bad Mexican Restaurants Around the World” is certainly a travel blog post begging for an author. Seoul is fast becoming a city where it isn’t difficult to get Mexican fare – there are several places in the Itaewon area, and Gangnam and Hongdae have a few locales, too. There are higher-priced offerings that don’t get it quite right (Pancho’s in Itaewon), lower-priced ones that get it horribly wrong (Choi’s taco travesty in Sinchon), and places that taste good, but are missing something (Dos Tacos, Hongdae and Gangnam). As for affordable, authentic Mexican fare, though, there’s a gap in the market. Enter Tomatillo.

Chef and co-owner Peter Chun, who spent nearly three decades in Los Angeles, realized the need for good Mexican food in Seoul a long time ago, and not just for the foreign community. “Mexican food in general, the taste suits Korean people, similar spices and all…in LA you go to Mexican places and there are always Koreans in them,” he said. When he would come home on visits, he’d always struggle to find decent Mexican food. The idea for Tomatillo came about a while back, but things didn’t happen quickly. “We couldn’t get the ingredients four years ago,” Chun said – cilantro, limes, and the right kind of beans, among other things, were all hard to come by.

Not a chef by trade, Chun studied under a Mexican cook in LA to learn the trade. Then he came back and opened Tomatillo with his cousin, Sung Ho Yu, near the Jongak subway station in September 2008. The restaurant is in a touristed area, but not one generally trafficked by the expat community. At first, business grew slowly, largely by word of mouth (and stomach). An early customer, American Steve Reyes, ending up befriending Chun and eventually becoming Tomatillo’s Business Development Manager. He then helped Tomatillo launch an ad campaign that was unconventional, at least by Korean standards – it started a Facebook page.

“I never thought that FB would work in Korea,” confessed Chun. But, luckily for him, he was wrong. Tomatillo organized a Cinco de Mayo party to celebrate the Mexican day of independence. At the time, the restaurant’s page had around 200 fans. But, perhaps because it was a beautiful day, and perhaps because May 5 is also a national holiday here (at least until the government cancels it in the name of worker productivity), nearly 1000 people turned up, looking for tequila, cerveza, and a taco or two. The place ran out of food by early afternoon. (As a matter of full disclosure, this author was turned away hungry and disappointed, though that did not stop him from going back). “There were people at the restaurant who came from Busan,” laughed Chun. When people are coming from across a country to eat at your restaurant, perhaps you are on to something.

Tomatillo now has nearly 1500 Facebook fans and two additional locations – a small take out window in the basement of the Hyundai Department Store (easy to miss even if you are looking for it) and a larger space in the basement of the Gangnam Finance Center, which opened last month with a Mexipalooza outdoor party. There are weekly specials – in the Jongno location, you can find things like Korean pork burritos and bulgogi tacos, and the GFC branch is running a 4000W margarita Happy Hour on Friday afternoons and Saturdays to drum up weekend business.

Tomatillo’s culinary philosophy is simple – fresh food and an open-space kitchen area where you can watch it prepared. The menu is a standard Mexican line up – taco, burrito, quesadilla, tostada. You walk in, pick your meat (or veg), tell the counter person what type of tortilla you want it wrapped in, y nada más. Chips, shells, salsa, and sauces are all made fresh daily, on site. Prices are designed to offer maximum bang for minimum buck – no item on the menu costs more than 7000W. Margaritas and Mexican beer complement the fare nicely. Service is friendly, but, at times, muddled – I received the wrong order on one occasion and know others who’ve suffered a similar fate, though staff are nothing if not gracious in righting their wrongs. But perhaps the highest compliment you can pay to Tomatillo is that a review of the restaurant doesn’t have to say that much about the food – it’s just good Mexican fare, plain and simple. You may find a restaurant with more ambience, you may find something fancier, but if you’re looking for affordable, authentic Mexican taste in Seoul, Tomatillo’s got what you need.

Gangnam – Yeoksam subway stop, Line 2 Exit 2 – restaurant is in the B2 level of the Gangnam Finance Center

http://www.tomatillo.co.kr/ (English version will be up soon)

and, of course, you can find the restaurant on Facebook – Tomatillo Grill
tomatillo