November 20, 2009
Here is the story that I wrote for the Seoul Tourism Site. You can go to the link to view more amazing pictures. Please leave a comment on their site because they are one of my sponsors and it helps me. Here's the link: http://english.visitseoul.net/visit2007en/aboutseoul/whyseoul/whyseoul.jsp?cid=46&sid=2511 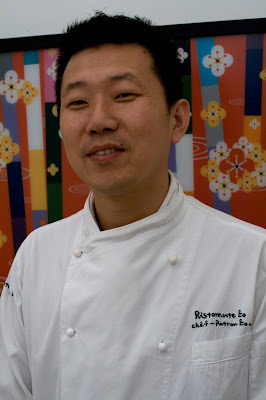 Sometimes I have to bite my tongue and eat my own words.

It is no great secret that I've had disdain toward restaurants in Cheongdam. In the past, when people have asked me to recommend restaurants in this area, I have tried to persuade them to go elsewhere.

My belief was that these restaurants - although glitzy - just had overpriced, bad food. Maybe I was just looking in the wrong spots or maybe I didn't notice a new trends taking place. The interiors are still beautiful, but now the food actually tastes good. Also, there are quite a few restaurants with owner/chefs. These well-traveled chefs have trained at top restaurants overseas and they are bringing their flavors to Seoul.

Eo Yun-geun is one of these chefs. This gregarious chef has a great passion for food and it shows in the vibrant nature. Chef Eo received this unusual name while in Italy where he worked for almost a decade. His comrades couldn't pronounce his Korean last name, "Oh," so they affectionately called him "Eh-Oh." During his tenure in Italy, he learned to speak Italian and he worked at various restaurants, including the prestigious 2 star Michelin Restaurant at the Four Seasons Hotel in Milan.

Gourmet Eo is perfect for a comfortable outing with friends. There is a reasonable selection of wines, which start at 40,000 won and go up to 100,000 won per bottle. If you order a bottle of wine, the restaurant will start your dinner with a selection of fresh baked bread, slices of ham and proscuitto, and chunks of parmesano reggiano cheese.

Gourmet Eo has many authentic Italian pasta and meat dishes. I ordered the lasagna, which looked a bit "short," but the pasta was delicious and so was the tomato and beef filling. A friend ordered the gnocchi and this dish made me quite envious. I told myself I would have to order this fluffy potato pasta in Gorgonzola cream sauce next time.

Another friend had the Ossobucco. The meat was so tender, it just fell off the bone. The atmosphere of Gourmet Eo is very open - probably more so in the summer when they open the roof. Also, surrounding the perimeter of this courtyard were lime trees heavy with fruit.

Now, I did have one complaint with this tent covered seating area: smoking is allowed. With food this good, cigarettes shouldn't be allowed to interfere.

Ristorante Eo is an elegant affair. The private rooms have warm light from candlelight and the elegant array of crystal, china, and silver foreshadow the meal to come. Once you sit, you are offered Chef Eo's hand written Grand Prix menu, which changes according to the season, ingredients, and the chef's mood. On the summer evening I went, the first course was a canape with a medley of finely diced avocado, tomato, and red onions served on a spoon. To the side were two slices of broiled fresh water eel and a shot of watermelon juice.

The course menu had seven courses, so I can't describe every dish; but the stand out dishes were the perfectly seared foie gras with a red wine sauce; the silky, cloud like gnocchi; and Chef Eo's patbingsu and watermelon sorbet. The meal ended with an espresso spritzed with a shot of grappa. It's a perfect meal for a special occasion.

After our meal at Ristorante Eo, the chef greeted us and asked us how it was. We told him it was delicious, but I had a nagging question throughout my meal.

I noticed that his crusty bread had a surprisingly elusive lemon flavor and I wanted to know how he did this. Chef Eo seemed surprised. Although I had eaten a meal with many sumptuous dishes, I was asking about his bread. He abruptly left. I thought I had said something wrong, but 5 minutes later he returned with a tray with 12 differently colored salts. He told us that he made and flavored his own salts and that's how he added the lemon zing to his bread.

Wow, I thought, this is one serious chef; he makes his own salt.

Daniel Gray works for O'ngo Food Communications. You can follow his food adventures at www.seouleats.com

Directions: Go to Cheongdam Intersection and make a right at Gucci, then make the next right.