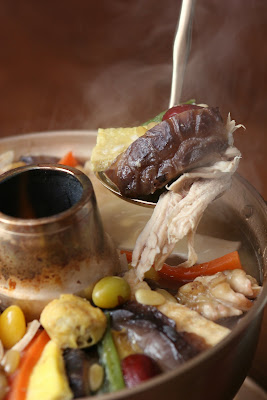 Since the airing of history drama “Dae Jang Geum” all over Asia in 2005, “Palace Cuisine”(Gung Jung Yiori) became the buzzword in many countries, especially Hong Kong, Taiwan, and Japan. Just the topic of Palace Cuisine alone has drawn flocks of tourists to Korea, particularly from Japan.

Just what is “Palace Cuisine” and how does it actually taste?

To find out, there are few higher authorities to turn to than the Jihwaja restaurant group, opened and run by the family of Hwang Hye Sung (1920-2006). Hwang Hye Sung, started her career as a culinary lecturer at Sook Myung Women’s University in the 1940’s. She learned her craft directly from Han Hui Soon, one of the last royal chefs of the Chosun Dynasty, and later facilitated the Korean government’s designation of Chosun Dynasty Royal Cuisine as “Intangible Cultural Asset of Korea #37.”

In 1991 Hwang Hye Sung and her family, including her daughter Han Bok-Ryeo who heads the Institute of Royal Cuisine today, opened the Jihwaja group of restaurants which specializes in Palace Cuisine. On of the branches, named Gung Yeon (literally “palace banquet”), is located right among the beautiful old Hanoks in Gahoe Dong.

Having said that, don’t be surprised to see the modern settings of Gung Yeon as you enter, especially by the two-poolside tables with umbrellas in the garden. However, as you enter the restaurant one becomes reassured of the historical authority of the place by a painting of a scene from a royal feast, next to which hangs a picture of the revered Hwang Hye Sung.

I had barely sat down as I clamored to order Dae Ha Jjim, a dish that’s considered the “King of Royal Cuisine”. Dae Ha Jjim, literally “large steamed prawns” in Hanja (chinese characters), is comparable to a modern prawn salad, albeit with the most unusual combination: the original recipe calls for prawns, sea cucumber, beef shin, cucumber, and bamboo shoot. Even more unusual is the “dressing”: ground untoasted pine nuts mixed with the broth from the steaming of the prawns.

However, to my surprise, Dae Ha Jjim served at Gung Yeon excludes sea cucumber in its contents. “Unfortunately most foreign guests are not used to the taste and texture of sea cucumber,” laments Ms. Kim, Jihwaja’s PR manager. Nonetheless, the creamy and aromatic flavor of untoasted pine nuts, a staple of royal cuisine, does blend well with the freshness of the prawns.

Next came the dish that should be, according to its name, so tasty that you’ll “feel like a fairy”----Sin Sun Ro. One of the meanings of “Sin Sun” in Hanja means “fresh”; thus it was conjectured that the name originally meant “made with fresh ingredients”, or made in a “freshly-forged pot”, as Ro means pot or stove. However, “Sin Sun” can also mean fairy, and in modern writings referring to the dish in Hanja are written exactly as such.

Well, when the royal casserole that looked like a copper bundt pan was brought forward, the author was taken aback by the small size compared to its “royal” price of 35,000W.

“It’s the work that goes into it that gave it its price,” explains Ms. Kim. “In this hot pot aside from high quality seafood and vegetables, we also use three kinds of broth: beef, old chicken and young chicken.” 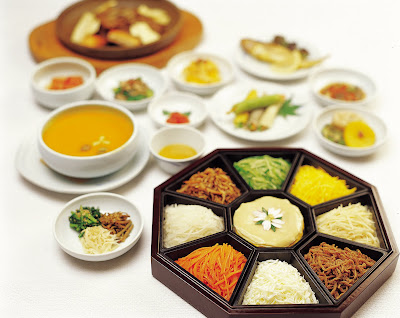 Well, next came the dish that truly convinced diners of the hard work that goes behind Royal Cuisine: the visually stunning Gujeolpan. Literally meaning “nine-section platter” in Hanja, the wooden-platter with multiple removable sections had its origins in China, where you’ll see something similar being used every Lunar New Year.

In an actual meal, the ingredients of Gujeolpan usually consist of very finely julienned beef, Chinese mushrooms, cucumber, scrambled egg white and egg yolk, etc. In the centre of the box are thin pancakes, which are normally replaced with thin-sliced turnips in the winter.

I tried to proved my refinement by making a perfect wrap just with my chopsticks, because the use of hands while eating this refined dish is deemed uncouth. After a few awkward attempts, I think I have a new skill to show off at my next blind date.

The fine knife work in Gujeolpan shows craftsmanship that’s similar to Shandong Cuisine of Northern China. The labor that goes into it makes us appreciate why it took in those days fifteen years of training to become a full palace maid.

Aside from Royal Cuisine, Jihwaja restaurants are also famous for their traditional rice cakes and pastries for all occasions, especially weddings. The most eye-catching is the dessert version of Gujeolpan, my favorite item in which is the dried persimmon stuffed with walnut.

If I get married I might think of having them do the catering---but please put back the sea cucumber in Dae Ha Jjim! 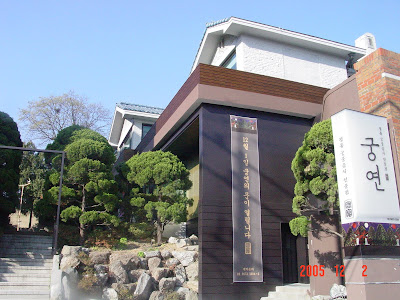