Slow Food at OK2 Kitchen Review up on Visitseoul.net 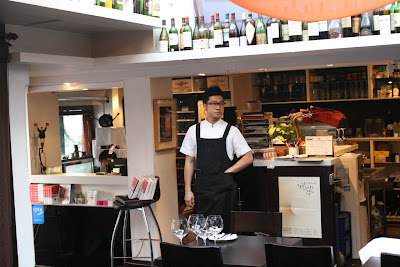 Now, I'm kinda worried that I might have over-promoted this restaurant. It doesn't matter because it's just that good. Here is my article on the Seoul Tourism Website:
http://english.visitseoul.net/visit2007en/aboutseoul/whyseoul/whyseoul.jsp?cid=46&sid=2463. Be kind and leave a comment on their website (on the above link), because they support my website and my eating addiction.

OK2 Kitchen near Itaewon Station is more than just “O.K.” Originally, I thought the name was play on the Korean name for traditional house: Hanok, because the restaurant is set in a Korean traditional house. But after speaking to the owner, I learned it was named after his wife: Jeong-mi Oh.

Jeong-mi Oh, or known as Jaime Oh, is a famous food stylist, teacher, artist, and curator. Her works have been displayed around the world. Most recently she was the curator of the Gwangju Biennale. The owner is chef Susumu Yonaguni of the pioneering Korean/Japanese restaurant “Eat and Drink” (where both of them had worked) in New York City. The New York Times Food critic, Ruth Reichel said, “Eat and Drink has the feel of a restaurant created by artists for artists.”

These two are truly artists and they bring their art and skill to Seoul. OK2 Kitchen reinvents traditional norms with an emphasis on quality, art, and doing things the “Slow Food” way.

So what is the “Slow Food” Movement?

Slow Food is an idea that was started by Carlo Petrini in Italy to combat the commercializing and mass production of “Fast Food.” In 1986, the first McDonalds was set to open in the historic Piazza Spagna in Rome. Carlo saw this as the harbinger of death to traditional ways of cooking, so he and his followers protested by standing outside the McDonalds with bowls of penne. Chefs, restaurants, and diners embraced this ideal and many make their food the traditional ways.

Chef Susumu Yonaguni and his wife, food-artist, Oh Jeong-Mi are heading a quiet revolution. They grow many of their own herbs, they salt their own cod, and they even smoke their own salmon and duck. Everyday the restaurant makes fresh bread and puff pastry. While I was there, they were they working on making their own Prosciutto, which I was told would be ready in two weeks. (I marked it in my calendar). Of course, 2 people couldn’t do all this on their own. Chef Yonaguni is not just a restaurateur; he is an educator. He teaches the 12 young cooks that work in his kitchen.

The menu is seasonal, so items change based on availability and freshness. You could start out with a pumpkin soup one day, or a sushi tasting appetizer with yellow tail tartar, mackerel, and cerviche on another.

I went on a Saturday with a friend and I ordered Lunch Set B with the Wagyu Steak. My meal cost W35,000 won, while my friend’s cost W20,000 won. Each lunch set has 6 courses, and each course is a well thought out. 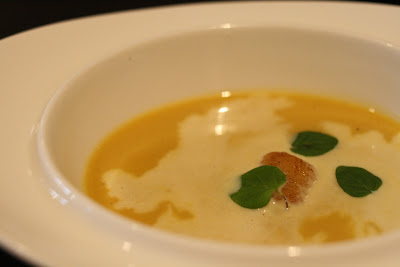 Our meal started out with a creamy pumpkin soup topped with cream and fresh oregano. In the center of the soup was a perfect piece of potato gnocchi which harmonized the pumpkin and creamy flavors. This soup was a refined alteration of the “Korean Pumpkin Juk”: pumpkin and rice porridge.

This was followed by a two slices of smoked salmon. One slice of the salmon was topped with a grapefruit sorbet while the other slice had orange zest and capers. The smoked salmon was richly flavored with the sticky-savory taste of hickory smoke. 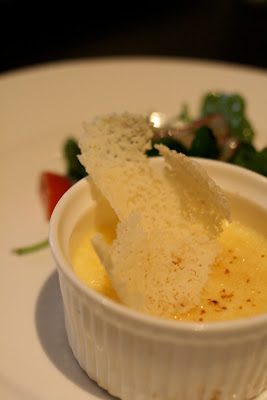 The next course was a heavenly parmesan flan with a crispy, crumbly parmesan chip. Oh, this dish was a juxtaposition of all that is good. The creamy egg and cream hugged the salty, bold taste of parmesan. I could have simply stopped at this dish and it’s a dish I wake up craving. Looking back, I think I slowly ate this in order to enjoy every last bit. 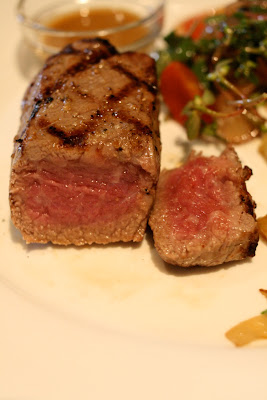 Then my steak came. I had ordered it bleu because I wanted to see how skilled their kitchen was. A bleu steak is covered in oil and cooked over a very hot flame so the outside is seared, but the inside of the steak is quite rare- almost raw. If you have a good cut of meat, this is the best way to have steak. Again, they didn’t fail to impress for the steak was perfectly seared and it didn’t lose any of its moistness. The steak was paired with a light salad and potatoes. 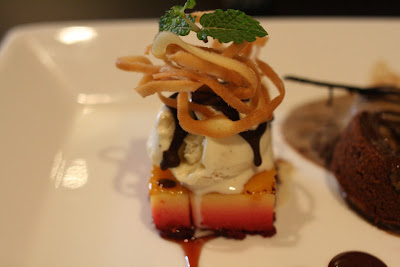 Course 5 was coffee and course 6 was 3 amazing desserts. The first was a molten chocolate cake topped with chocolate ice cream. The second was a butterscotch caramel pudding. And the third was a beet brulee cake with Gorgonzola cheese ice cream and crisp cookie strings. Initially, the last dessert sounded utterly disgusting, but one taste made me a believer. The beet flavor of the brulee cake was accented by the caramel flavor of the burned sugar. This was then heighted by the creamy, perplexing notes of Gorgonzola cheese and the fragile, snapping flavor of the cookie threads.

Directions: Go out Exit 1 of Itaewon Station and make the third? right (it's the one near the traffic light). You’ll see "Pacific Shopping” on the corner and OK2 Kitchen to the left.

Daniel Gray is a food writer and consultant in Seoul. www.seouleats.com