The bibimbap ad in the New York Times is embarassing 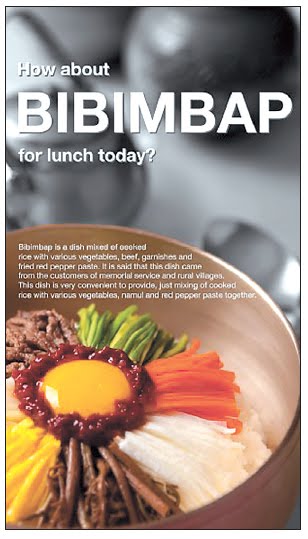 Here is the text:

How about bibimbap for lunch today?

I assume this was written by Seo Kyoung-duk - an honorary professor at Sungshin Women's University.

The title is ok. It grabs your attention and so does the picture. However, I'm not sure if the text matches the picture because there is raw beef and a raw egg. (I guess the egg is the "garnishes".)

Here are my problems with the text:

I have a major issue with the following line, "It is said that this dish came from the customers of memorial service and rural villages."

Customers at a funeral? What are they buying? Oh, and death does evoke pleasant feelings, nor does it make me think of delicious food. "Rural Villages" is ok, but I don't think a funeral and a farm should be in the same sentence. The rural village should have been a separate idea and I think the idea of using "farm" or "locally grown" would have been better.

The last line is just a repeat of what was said earlier. And why say cooked rice? Of course the rice is going to be cooked. It could be confusing because it implies that the vegetables might not be cooked.

The last line also uses a Korean word: namul. People that don't know Korean won't know what it is. It should have been taken out.

Overall, this advertisement that went in the New York Times looks like something a middle school student might have written. Seo Kyung-duk should have done a little research, got the piece proofread, or contacted a marketing company to help write the ad.

Also, why promote bibimbap? I think Korean Barbecue would have been a homerun something a majority of people could embrace.