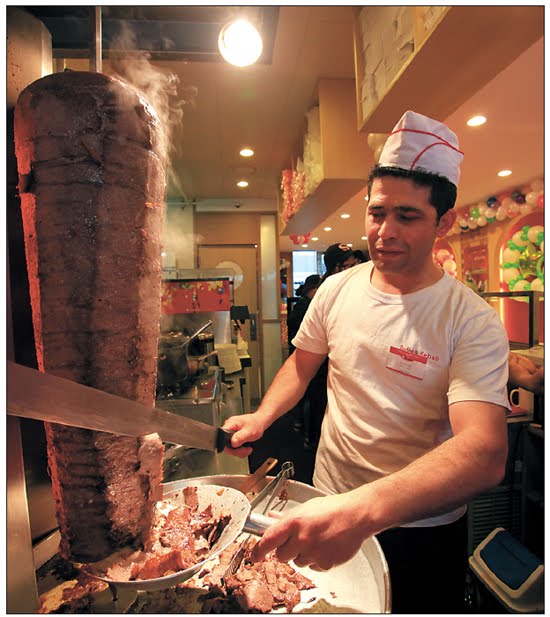 Yakup Baraym, 35, from Turkey prepares a kebab at Sultan Kebab in Jongno, Seoul yesterday. Sultan Kebab came in second in foodie Daniel Gray`s "Top 5 kebabs" list. [Matthew Lamers/The Korea Herald
The Korea Herald published my story on the best kebab in Korea. You can see it online here or pick up a copy of today's Korea Herald to read it.

Seoul Eats If you happen to run into Rami Mohammed from Yemen, don't mix up kebabs and shwarma.
Mohammed didn't call the chicken or lamb dish cooked on a rotating spit and wrapped in tortilla with pickles, lettuce, tomatoes and a sauce "kebab." He called this dish shwarma.

"Kebab is usually made with ground meat, while shawarma is made with whole meats such as chicken," he said. Also, a kebab - which he called doner kebab - is not supposed to be served on a thin tortilla. Rather, it should be served on a hearty bread he called ekmek arasi.

While I respect his scruples, this did not stop me on my search to find the best shwarma/kebab in the Itaewon area. It's no longer a fad, but a movement. On Friday and Saturday Nights, you'll see restaurant after restaurant and truck after truck on the street selling these spit-seared delights.

On the search for the best shwarma/kebab, I decided to stay away from the street trucks. I feel the trucks charge the same price as the brick and mortar establishments and their roving nature makes them difficult to track down. My criterion for rating was: bread, toppings, quality of meat, service, price and overall experience.


5. Mr. Kebab - The newest addition to Itaewon is doing well in their freshman effort. The sauces had good flavor, the usual suspects of toppings were there: lettuce, tomato, onion and cucumber. The bread was homemade and toasted as well. It's your run-of-the -mill kebab. They are open late at night and they have Turkish ice cream, dondurma, for dessert.
Cost: 4,000 won
Phone: 010-7758-1997
Website: www.mrkebab.co.kr
Location: Next to Dunkin Donuts, adjacent to fire station

4. Anakara Picnic - This place is always hopping with people. The fast turnover keeps the ingredients fresh and the meat juicy. The sauces bring out the flavor of the meat and the wrapping. I really enjoyed the tangy yogurt sauce, the zip of the pickle, and the juicy roasted lamb.
Cost: 4,000 won.
Location: By subway exit No. 3

3. Istanbul - This kebab place has been a mainstay for years, and for good reason. They don't skimp on meat or toppings at this little joint. It has a friendly local bar feel to it and you'll often see locals enjoying their kebab with a beer. The kebab has been modified a bit and the addition of thinly sliced white cabbage adds a pleasant crunch. Istanbul has the best beef/lamb of the bunch and the yogurt sauce cools down the spice of the charred lamb and beef. They give you the option of having your kebab on tortilla, but I recommend the hearty ekmek arasi bread.
Cost: 4,000 won
Phone: (02) 796-0271
Location: Noksopyeong Station, Exit No. 2, walk straight

2. Sultan Kebab - This is one of the original Turkish Kebab places in Itaewon and they've made a consistent, quality product for years. The owner, Omer Yilmaz, is a robust bomb of energy and his kebab's are a sizable feast. He uses fresh ingredients, the meats are moist and his toasty bread has nice body. I recommend adding a little lemon juice; it adds a sharp accent to this delicious snack.
Cost: 4,000 won
Phone: (02) 749-3890
Location: Loop around Itaewon Station, Exit No. 3, make a left at the Coffee Bean and then take the next left (Also a new location downtown)

1. Petra Shwarma Palace - This place is the best. Why? For one, the homemade bread is a feathery pillow for the delicious fillings. The guys there artistically assemble each shwarma. They swab a little green sauce on the right side of the bread, then a little tahini in the middle and a little cucumber yogurt sauce on the right. Then they pile the crisp, yet moist chicken on top with paper-thin slivers of lettuce, pickle, onion and tomato and then wrap cloth the whole thing in wax paper. It's almost too beautiful to eat. The first one was so delicious; I had to have a second just to make sure it wasn't a fluke.
Cost: 4,000 won
Phone: 010-2660-6117
Location: Go out Itaewon Station, exit No. 2, walk straight