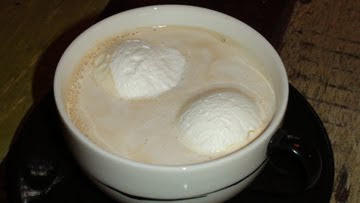 Written by and Photographed by Hwang Hye-jung

Seoul’s Bukchon-dong is synonymous with traditional houses and small shops. It’s an area where you can day dream about holding a warm beverage next to the fireplace while watching the leaves blow outside. This thought is what inspired artist and musician, Mr. Cha, to open his aptly named café Doo Roo.

In Hanja (Chinese characters), Doo Roo (豆縷) means the “wafting fragrance of the beans”.  The shop was opened in September and, appropriately, offers a small menu of mostly organic coffees, teas, and juices.

Their fresh fruit juices, weighing in at a hefty 7,000W, are admittedly among the priciest I’ve seen in Seoul. However rest assured that they are worth their tag as generous chunks of fruit are blended to fill your daily intakes of vitamins.
This place also has the best hot chocolate that I’ve ever had the pleasure of trying.
It is just the way it should be: rich and creamy with the slight tinge of bitterness from real cocoa and just a hint of sweetness to remind you that it’s a treat. However, the pride of Mr. Cha seems to be Doo Roo's hand-dripped coffee. 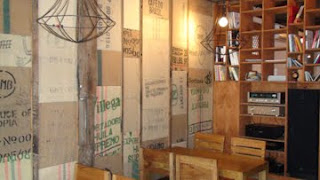 “To make good coffee you need to pour the water several times to get the right temperature.” Mr. Cha demonstrated this technique as he shuffled hot water like a deck of cards. He then he set freshly-ground coffee beans on top of a pot, and like a well choreographed ballet, he lovingly poured delicate streams of water on top to create a frothy and aromatic foam.

The finished product was adorned with two impressive clumps of fresh cream. Now it should be noted that Doo Roo only has three food items on its menu. During this sitting, Mr. Cha chose to serve the café’s heavyweight: their famous double toast. The impressive thickness the bread prompted me to ask if it was homemade. 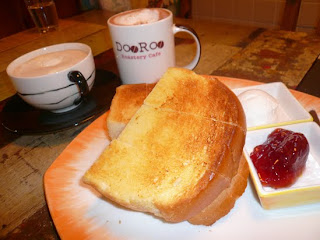 “It is not homemade but we have it special ordered,” says Mr. Cha with no less pride than the actual baker, whomever he or she may be.

In contrast to most places in Korea that serve their toast with butter, Doo Roo serves it with jam and cream---similar to how the English serve their scones.
Despite Doo Roo’s likeness to Western coffee shops, it still fits perfectly with its Bukchon-dong surroundings. The shop’s rustic atmosphere is a product of its intellectual décor.

Coffee bean bag cutouts from all over the world adorn its walls and stacks of classical music magazines are piled on the shop’s bookshelves. According to Mr. Cha, Doo Roo may soon accentuate its already decadent atmosphere by hosting non-amplified music performances.

Doo Roo Roasting Factory is located at the entrance to Bukchon Hanok Gil in Gahoe Dong. Take the exit 2 at Anguk Station, then walk straight for about 3 minutes. Walk past the bench between the funny big-mouthed statues on the left, and when you see the Royal Dessert School on your right, cross the street. You willl see a wooden house boutique.  Doo Roo is located right behind it. 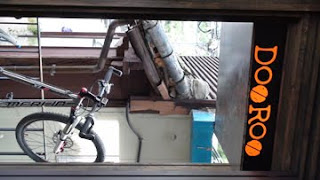