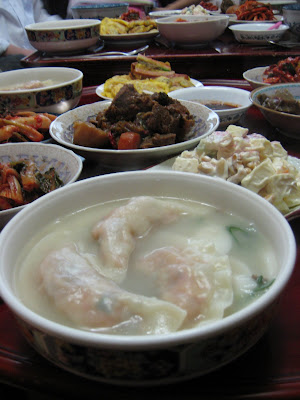 Written by Lindsey Huster
It's said that on the morning of New Year's Day, the first sound you hear will predict how the rest of the future will turn out. If you hear a magpie's chirp, then there will be good luck for the year. If you hear a crow or a sparrow, it symbolizes a poor harvest and bad luck.
On this Chinese New Year, however, most households' ears will be met with a long, unrestrained sigh from Korean women. Yes, another Seollal has passed. It's no surprise that Chinese New Year is not a holiday most women. Instead, it is an accumulation of unrealistic expectations that build into a massive heap of holiday havoc for the Korean XX chromosome.
The stress of this holiday first commences in crowded markets and shops. Korean women begin their frantic search for the freshest meats, fruits and vegetables a few days before they travel to their in-law's house. Markets and shops are clogged with tired women, who fight over food and finagle prices to the best of their ability. Even with the best haggling ajummas, Chinese New Year is a holiday that always breaks the bank. The stress of the holiday only increases after the laborious crawl to the ancestral origins of their husband's families.  Once there, the first daughter-in-law carries the grunt of the workload preparing food for the celebration. Often, women slave in a kitchen for one to two days to prepare food. With at least 20 dishes to cook - wild vegetables, fish, Korean style pancakes - the food must not only be tasty but it also must be aesthetically pleasing. Additionally, the women must prepare an exorbitant amount of food, both for the family as well as ancestor rites. Both quantity and quality of the food are under severe scrutiny. This strive for perfection is inflicted in particular by elder female in-laws, who at one time where the recipients of such female criticism.
Outside of the panic-stricken kitchen, the remainder of the family relaxes and celebrates Seollal at the other end of the holiday spectrum. Usually, the men lounge languidly watching television, while the children busily play traditional games.
This scene is far from a Norman Rockwell holiday moment.
Although many of Chinese New Year traditions should remain perfectly intact, the hierarchy and gender inequalities need to evolve. This is the twenty-first century, and Korean women should be allowed the opportunity to enjoy Chinese New Year. Women, especially the eldest son's wife, should not carry the burden of the holidays solo. There must be room for women to share the workload with the men and children of the family. The entire family should participate in the preparation of food.  This would be an opportunity where children would gain a better understanding of the origins of their roots. Additionally, it will help everyone involved to recognize the amount of work it takes for preparing a Chinese New Year feast.
If the Chinese New Year is the holiday it claims to be- one that focuses on the family - then it should include the entire family working together in preparation as well as celebrating the season.