Food for Thought: A Lesson in Korean Drinking by Lindsey Huster 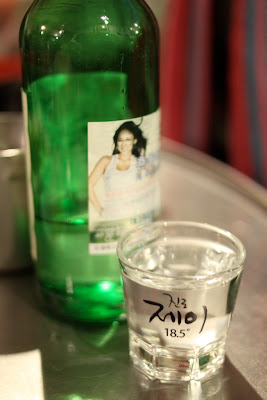 A recent lesson in my elementary class turned to a Korean drinking lesson for me .

The vocabulary word "party pooper," described a person who ruined the fun at a party. One of my eleven year-old students, however, felt it necessary to educate the class (and myself) on the actual Korean definition. Through a series of chugging and gagging pantomimes, she instructed matter-of-factly that the party pooper is the one who vomits when drinking.

Although I felt confounded with the astute observation- and the precocious thinking- my pupils nodded their heads in agreement and at the normalcy of the response.

It’s no secret that Koreans are heavy drinkers. Although countries like Luxembourg and Ireland beat Korea with the highest per capita consumption of alcohol, Korea ranks 16, which is higher than both Japan and the United States. In 2006, it was estimated that the average adult Korean (older than 20) had consumed 90 bottles of Soju that year.

Regardless if a Korean is among the proletariat, or upper-class, it is not an uncommon occurrence to witness oversaturated drinkers. Friends and lovers fireman carry their passed-out girlfriends, while two friends will grab opposing appendages as a friend's head hangs pendulously and unresponsive. Kimchi-colored vomit also tends to color the streets and alleys as proof of a “successful” evening.

With the days growing longer and warmer, it is expected that partying and celebrating will only increase. After a evening of drinking, it may be possible to see a few remnant partiers sleeping (most likely passed out) in a seasonal gutter slumber.

When asking Koreans about the need to drink heavy with friends and coworkers, most answers alluded to "Nunchi," which refers to a group feeling and mood. This cultural feeling attempts to gauge how others how feel and adhere the group feeling. Additionally, nunchi recognizes the context of one's hierarchy relevant to others social standings. Leaving early from an evening out may ruin the nunchi of an evening. To refuse a drink from a Korean elder proves even more disreputable.

As one friend put it, When you are with your friends, you keep drinking with the group. If you get too drunk, don't worry, because your friends will take care of you. Although this mindset readily displays the amount of trust friends and coworkers have with each other, it also shows the willingness and obligation towards binge drinking.

Unfortunately, it doesn't help that the subways close between 12 am to 5 am and most bars remain open all night. As a result, it is likely that a night of heavy drinking will continue until early morning. While it is customary to order food while drinking, such actions hardly stagger the fast-paced sprinters towards inebriation and black-out drinking.

Thankfully, it is culturally unacceptable for Koreans to drink alone. Drinking is done within a group setting, amidst coworkers and students. When it comes to business, excessive binge drinking is seen an opportunity to team build. According to an article in the New York Times, workers end an evening holding hands and leaning on each other so that "the next morning, back at the office, they are ready to fight, with reaffirmed unity, for more markets and at home and abroad." Drinking at a pork-grilling rendezvous with shots of Soju at hand, proceeded by several other bars and norabongs, is seen as crucial for successful relationships and business.

Students too, drink excessively in efforts to procure long withstanding friendships. Koreans begin drinking around the age of 20 in Korea (18-19 by other time standards). Students generally follow a similar protocol in regards to the consumption of alcohol. Many students like to engage in numerical drinking games, such as Baskin Robbins 31, a game where you go in a circle and can say up to 3 numbers at a time. The unfortunate individual who has to say 31 has to drink. In the same way, drinking continues throughout the evening at a number of bars, and usually ends with a few egregiously odes in a norabong.

Although foreigners can be given a pass and go card when it comes to over-consumption of alcohol, it is still almost expected to drink to extreme intoxication if you wish to bond with fellow Koreans. With more and more women becoming part of a once all-male career landscape, it has been a difficult acclimation into a culture of heavy drinking. Some women are allowed to call on their "dark knights" to rescue them from an unwanted shot or "one shot," in exchange to do whatever that person asks.

In efforts to escape chiding remarks, however, most Koreans and foreigners alike will usually become myrmidons of the night life, partaking in as much or as little as the eldest worker or friend allots. Such prescribed drinking leads not only to hangovers, but to long-term unhealthy habits. Binge drinking has been strongly linked to alcoholism. Other effects of such heavy drinking include alcohol poisoning, chocking on vomit as well as other activities that may inhibit and increase risk-taking activities.

In some business settings, the focus of drinking has gradually moved towards other opportunities of team building sans the spirits. In 2004, a 29-year-old graphic designer won a law suit, which stated that forcing a subordinate to drink alcohol was illegal and a "violation of human dignity." Such cases are rare, however, and at least 90 percent of company outings focus on alcohol, according to the Korean Alcohol Research Foundation.

Although Korea may not consume nearly as much alcohol as other European countries, Korea's drinking culture appears just as deadly and unhealthy. Rather than being a marathon runner in the arena of drinking, Korea is one of the fastest sprinters, taking shots and drinks until passing out onto the finish line of the evening, or early morning.

Rather than focusing on the alcohol consumption, Korea should continue to concentrate on what lies beyond the Soju and beer: the relationships. It is possible to create a team bonding experience without a large presence of alcohol. By focusing on the "group feeling," listening to when people really should stop drinking, and allowing the possibility of other activities, friendships and bonds will prove just as impermeable (or even more). Rather than feeling the obligation to drink, friends and coworkers can instead choose when to stop drinking, or know that their friends will tell them when they have had too much. Although the hand of Confucianism has a notable grip on Korean culture, it is possible that the individual can be recognized and respected for knowing their own limits to drinking.

Lindsey Huster a writer who usually hails from Chicago. She enjoys listening to music,wearing cardigans and generally anything vegetarian. Send her an e-mail here: Lindsey Huster
food for thought friends lindsey huster