iPads for sale in Korea!

Today, I got this tip from a reader (Thanks Tai). It's on Craigslist and the guy is selling a couple 32 gig iPads in Korea for 920,000 won. The price seems right, but what about the product? Honestly, I'm too much of a chicken to find out. I only buy my Apple gear from legitimate sources or from people I know. 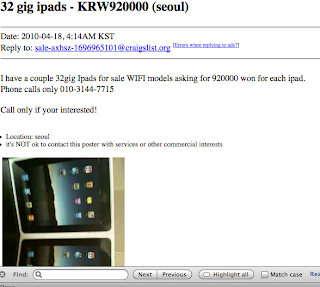 Speaking of which, my friend Richard is selling his 13.3 inch macbook with 2.4 processor for 1.1 million. Check out Daveseslcafe for more details.


Oh, before, I go back to talking and writing about food- I wanted to talk about the new 4G iPhone. I have been drooling over the pictures all day over at gizmodo.
I want it. I've been waiting forever for it (that's why I have my stupid LG Viewty Phone. I know, awful). My iPhone sources have told me that it won't come out this summer like the rest of the world because Apple released their iPhone later than everyone else. It would probably come out 3 months after the rest of the world! Boooooo. Let's hope my source is wrong because this phone is simply sexy. I want.

Will one of my nice readers buy it for me?