I think the main difference between American restaurant-dining versus doing the same in Korea is that here, going out to eat feels like I'm taking a short bus-ride over to my G-Ma's in Queens, NY.

"About two years ago, my mother-in-law sent me a container of pork galbi, which, when I started eating, I couldn't stop. I thought it was so good. From there, the idea for our own place emerged and here we are today," Michael says.

It's easy to get overwhelmed by the variety of western choices in Hongdae--you've got your Dos Tacos, Nolita Cafe, Donkatsu restaurants galore---and even in the Korean sector I had trouble deciding among the Ssam restaurants that permeate every alley.

Located behind the Seokyo plaza, this off-the-beaten-path restaurant aims to go beyond the typical grab-and-go meal. Hanjeongshik Damah serves traditional Korean entrees with a generous banchan (side dish) spread, all handmade on site with the freshest ingredients.

Junghwa accompanied me for lunch, and we managed to find the restaurant despite taking a quick gander at google maps before leaving.

Perhaps one of the most popular main dishes Korea is known for is sogalbi, the beef short ribs that are marinated in a special, thick soy sauce. Michael tells us this dish is a favorite among the customers, so we ordered it, as well as deodeokjaeyuk bokkum and dalkdoritang.

Our banchan came out looking pretty good; we first started with a pumpkin soup (호박죽, hobak juk), followed by some of our favorite banchan.

"I like that they serve a lot of spring vegetables for the banchan," Jungwha said as she picked up her chopsticks. "Do you know namul (나물, sprouts)? There are many different kinds here and it looks very fresh."

I can definitely understand why this dish is most commonly ordered---the flavors are really nice. Michael's mother-in-law has a special, secret family recipe that she uses to marinate the meat. I'd describe it as "pleasantly spicy."

Just what is deodeok? Junghwa knows of it as a sort of root or stem that is thought to be medicinal, but identifying it beyond that was a mystery to us. Naturally, I googled it, and if Codonopsis lanceolata means more to you than it does me, well, there you go. Just know that deodeok is a mountain root that has a sort of tough texture. I've seen it sliced up both like french fries and thin ovals (like pictured).

Unlike the the sogalbi sauce, though, the deodeok was sweet and spicy (jae yuk bokkum usually has sugar added to the marinade, rendering it a bit sweet rather than salty).

Finally, a half-portion of dalkdoritang (25,000W for regular size), a ready-to-eat spicy chicken stew, was set to simmer atop a portable gas stove on the table.

The chicken was tender enough, accompanied by potatoes, hot peppers, and onions. This dish is definitely not for the faint of mouth, because--and while sometimes I like to consider myself a champion when it comes to blazon' food---I felt like I just ate the sun. There were tears in my eyes. The level of spicy in this dish took away from the other flavors.

If you don't have a penchant for spicy food, you can ask for the entrees to be less so, but in our case, every meal was spicier than the last. That could also have resulted from our trying three main courses between us at once, so I would definitely suggest sticking with an order of your favorite item and balancing out the flavors with the banchan provided.

Since I'm not a native Korean, I asked Jungwha her opinion on the originality of the dishes:

"The sogalbi was different than any that I've had; it was spicier and had a distinct flavor," she said. However, the deodeokjaeyuk bokkum and dalkdoritang were a bit too spicy for both of us, and did not seem better or worse than a few other restaurants we've been to.

The general consensus between the both of us, and especially Junghwa, is that the food really did seem as though it was homemade. If you take a gander at Hanjeongshik Damah's restaurant site, it seems that other customers feel the same way.

"I think that last point really sets us apart from other similar style hanjeong-sik(한정식) restaurants. We buy only quality ingredients and put it all together for the customers.  So, if people want to have a real traditional style meal, made from high quality ingredients(I now check the prices of vegetables on a regular basis), then they can not miss with 담아한정식." --Michael Kenny 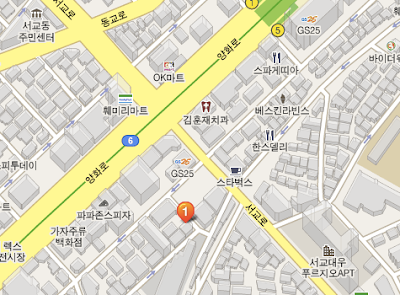 Klarika is a writer and photographer that is currently studying in Korea for 4 months. You can follow her adventures at http://helloklara.wordpress.com. You can contact her by leaving a comment or by sending her an e-mail here.


Disclaimer: Seoul Eats was invited by Hanjeongshik Damah to write about the restaurant. The reviewer was not paid to write the review, but the food was complementary. The restaurant owner agreed not to influence the reviewer's opinion. The opinions expressed here are those of the writer.
helloklara klarika Huszar korean restaurants restaurant introductions restaurant reviews reviews