Food For Thought: Should Korea change the face of Gochujang to fit more easily into Western mouths? 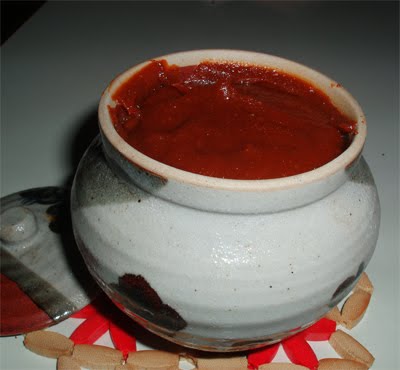 
Hop on an outbound Korean flight, and you may find yourself with one of the first tubes of in transit gochujang. The red pepper fermented paste can be now found on KLM Air Canada and Cathay Pacific flights with a course of bibimbap.
Even before this new contract, however, Gochujang has become condiment of  large (and small) proportions that’s gaining more attention. Gochujang-  a crimson paste composed of soybean, rice and red pepper- adds a unique blend of hot, sweet, salty and savory to a majority of Korean dishes. Healthy globs of this paste give many rice dishes a distinguishable rosy tint.
Gochujang is thought to have been introduced during the end of the Chosun Dynasty. With only a mere two hundred year history, this red pepper paste has expanded into a number of varieties (glutinous rice, barley, wheat, and red bean).
Distinguishable red Tupperware dress shelves (and sometimes aisles) of Korean grocery and convenient stores. Outside of Korea, however, it would be difficult to find gochujang in an American grocery store.
Until now that is.
With the recent push to thrust Korean cuisine in the limelight, a number of marketing and publicity initiatives are afoot. While the recent deal with  KLM Air Canada and Cathay Pacific spurs more  favorable attention, other marketing efforts appear more disadvantageous for Korean cuisine.
For CJ Cheiljedang Corp., however, it appears that keeping the identity of gochujang intact does not a remain a top priority. CJ Cheiljedang Corp. is altering this almost-indigenous paste into a sauce. They hope to sell this botched-up Frankensauce- nutty, sweet and not as spicy as the original-  in a bottle akin to ketchup. CJ Cheiljedang hopes that such a façade will dupe Americans with the notion that it is a dippable sauce that will bring a new zing to French fries and chicken fingers. The new “sauce,” under the brand name Annie Chun, will be available in 700 stores in the United States.
The end product, according to Korea Herald, will be positioned as “the next generation salsa＂ and "is a product that targets the average American consumer.＂
The problem, however, is that gochujang is not a sauce. It is also not a ketchup, salsa, or anything of the dipping variety. It is a separate entity that needs to be introduced and maintained by its own requisites. Masquerading gochujang as a sauce rather than a paste compromises the integrity and authenticity of Korean cuisine.
Unfortunately, CJ Cheiljedang also asserts that Americans are incapable of learning how to use gochujang in a paste form.
According to Chung Ha-myung, "If an American opens up this container of paste, they will not know what to do with it, how to take a spoon to it. That is why we need a sauce."
Although a number of American takes on global food exist- in a sense "toned down" versions of "exotic food"- it is not the job of Korean companies to the be gatekeeper of what Americans can (and cannot) handle in their food consumption.
Although plenty of altered foods and hybrids are consumed in America, just as many original and unaltered food varieties exist and thrive; one obvious example of such food relations is Japanese sushi. Sushi has become a springboard for many American varieties; American sushi first began with California rolls and now includes more obtuse versions like BLT and pizza sushi. Even with novel versions of sushi, however, traditional sushi restaurants successfully supply American eaters the nigirizushi, temakizushi, and makizushi they crave.
Rather than altering the flavor and consistency of gochujang, CJ Global Food should be marketing the health aspect of the paste. Gochujang boasts a healthy amount of vitamins and nutrients; it has a good source of vitamin C, Niacin, vitamin B6, Iron, potassium, vitamin A and riboflavin. In some studies, gochujang has also been linked to weight loss from the capsaicin it contains (the main cause of its spiciness).
Also, Gochujang exudes a contagious flavor that now I enjoy immensely as an ex-pat.  Although I came into Korea  with a spice-sensitive palette, I now enjoy a dollop of gochujang mixed into my eggs, pasta and rice dishes.  At restaurants, I often ask for a dish of the red stuff to add to my bibimbap.  Such spiciness and tang is a flavor that many Americans seek out in the condiment aisle (think Tabasco sauce).
Although in time, gochujang may morph (at the request of American consumers) into a milder form of its red self, that is not for Korean companies to predict and produce now. Rather, if any change occurs, it should be a gradual and organic transition that sits alongside the original.
Even if this newer and more relatable "American version" of gochujang succeeds monetarily in the average American household, it is a far cry from an authentic Korean red pepper paste. In order to win the hearts and mouths of Americans, gochujang must be itself. If gochujang-or for that matter Korean cuisine- proves this malleable, then both will continue to be seen as a hardly distinguishable Asian food group.
Gochujang, for now, should be sticky rather than sauce, and be what it knows best: a paste.
Lindsey Huster is a writer who usually hails from Chicago. She enjoys listening to music,wearing cardigans and generally anything vegetarian. Send her an e-mail here: Lindsey Huster