Food For Thought: Don’t drink for your health by Lindsey Huster 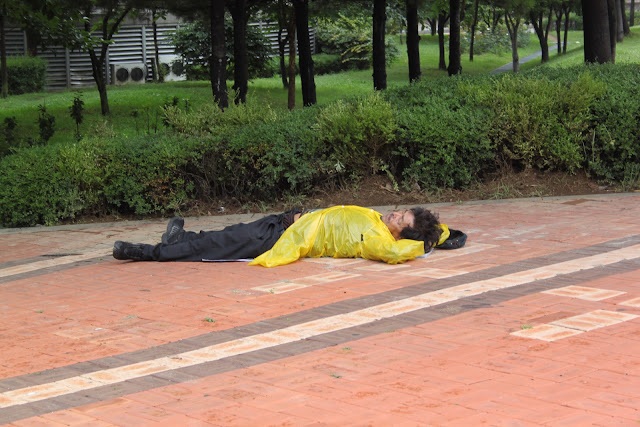 A female subway user sits across from me, wearing a cheerful t-shirt that pictures a sun. The happy, yellow orb states in a playful font “I am so hungover I wish I was dead.”
This does not phase me.
In a previous column, I have discussed the drinking culture of Korea. A large portion of Korean activities, especially work-related, focus around the consumption of alcohol well beyond the point of intoxication.
Another not-so-surprising detail is a new study recently released that claims Koreans are drinking more.
According to an article in the Korea Herald, the National Tax Services released a study that show Koreans have consumed an increasing amount of alcohol over the past ten years. In particular, beer, wine, whisky have increased the most.
The biggest increases have been seen in the consumption of wine and whisky. The amount of wine consumption last year reached nearly 46 million liters, more than six times 1999’s figure of 6.4 million liters.
Makgeolli, too, has gained more popularity. According to the study, Koreans consumed 261,000 kiloliters of Makgeolli in 2009, up nearly 48 percent from a year earlier.
“As standards of living are climbing along with the well-being trend, consumption of traditional liquors that used to be popular is going down, while more Koreans enjoy high-quality drinks such as wine and whisky,” an official said.
Although it makes sense that Koreans will drink more expensive alcohol, I would hardly gather that by drinking “high-quality drinks” show Koreans have decided to drink for their health.
Consuming wine does yield health some benefits. Wine may prevent heart disease by increasing the amount of "good" cholesterol in the body. Wine is also loaded with antioxidants that have a number of anti-cancer properties. Additionally, wine contains quercitin, which is a falconoid that can change your body’s reaction to allergens, viruses, and carcinogens.
Makgeolli, too, is a relatively healthful drink to consume. Makgeolli’s high fresh yeast content is thought to lower cholesterol. One of the metabolites from its yeast has antibiotic properties.
The problem with “healthier drinking,” however, is that you must consume a healthy amount in order to take advantage of the benefits. And this does not apply many Korean drinkers.
The proportion of Korean adults who drink alcohol, and who drink heavily, is among the world’s highest. About 46 percent of Korean men and 9 percent of Korean women are considered heavy drinkers, according to the Heechoul Ohrr, M.D., Ph.D., professor in the Department of Preventive Medicine, Yonsei University College of Medicine.
Many Koreans fit the bill for what is considered a “binge drinker.“ According to the Journal of the American Heart Association, binge drinkers are men who drank six or more glasses and women who drank four or more glasses of alcohol on one occasion at least once a week.
For Korean male binge drinkers, the statistics are staggering. Male Korean binge drinkers, have a 300 percent higher risk of having a bleeding stoke, and an 86 percent higher risk of a total stroke. Overall, the risk of death is 33 percent higher among male binge drinkers. Female Korean binge drinkers, too, also showed an increase risk of heart disease and stroke.
With this new study that shows Koreans are consuming more alcohol, false ideas that link it to “well being,” only skirt more obvious and pressing issues. The most obvious issues to tackle are why people are drinking more and who is drinking.
In order to qualify for “moderate drinking” men must drink no more than two drinks, and one only for women depending on weight. Ultimately, if Koreans, or anyone, want to reap the health benefits of consuming alcohol, they must drink significantly less.