Lazy Sunday with the Food Network 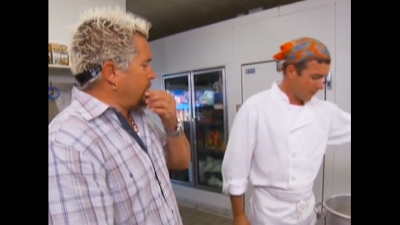 It's snowing today, so I'm not trying to go outside today. I am not a fan of the cold and I would rather live in a warm climate like Florida or New Mexico. I haven't had a day off in a long time so it is great to just be lazy all day. I got up at 10am and made some Shin Ramyeon to cure my hangover and then spent the morning doing some writing while watching the food network. I love the food network and I'm so happy that I can get it in Korea now via Slingbox.

It reminds me of being back in college when I used to live in my very crappy apartment with my roommates eating crap food while wishing we could eat what they were making on the food network. I have to say that my love obsession with food is largely because of the food network.

The current itineration of the food network is great. My favorite show is Diner's, Drive in's, and Dives with Guy Fieri. The places he checks out make my mouth water. I have to say that sometimes Iron Chef America gets on my nerves- especially when Jerry Steinberger is a judge. That guy just has a grating personality and I just want to turn off the show when he speaks. I respect his books and his writing- I just don't like him on TV.

Chopped is ok, but sometimes the ingredients they pick are just asinine. Today I watched a show that had burdock root as a secret ingredient.  Oh, now on today's show, Korean chef Tommy Lee won the competition.

Good stuff and a great day. I have another food show to watch.


Come take a cooking class or take a Culinary Tour in Seoul! http://www.ongofood.com
Pictures are taken either with my Panasonic DMC-G2 Camera with 20mm Lens or with my iPhone 4G
food network