January 24, 2011
This is the full, unedited review on Isabelles The Butcher Steakhouse story that was originally published in the January Issue of Seoul Magazine. It has been reprinted by permission.-Dan
Steak is more than just beef. It is symbol of a job well done, a special occasion, or a celebration. Now it can’t just be any steak- for a subpar steak can ruin an occasion. The cut, the aging, the sauces, and the quality of the sides represent your level of success. And the name is also important. A steakhouse should have a personality and exude some clout. When you say you are going to, let’s say, Peter Luger’s; it lets everyone know where you stand in the world. 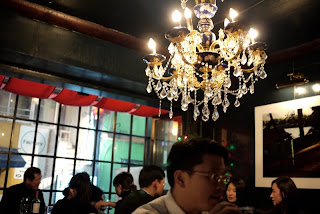 Isabelles the Butcher knows steak. The restaurant in Itaewon, although small, it is regally lit by candles and chandeliers. Although outside, there is the mad rush of the nightlife, Isabelles is refined and hushed- the perfect atmosphere to connect with your dinner guests.

The menu has classic starters such as French Onion Soup and Crab Cakes- you can even get sizzling bacon, but I was here for steak.

There are a variety of different cuts of steaks- each are priced by 50 grams (about 1.8 ounces). All of the steaks in the dry-aged section are aged for over 21 days and are Korean prime beef. The filet mignon and the chateaubriand are Grade 1++: the top grade of beef you can get. They also have American beef such as New York Strip, T-bone, and Prime Porterhouse in their wet-aged section (beef aged with seasonings in a vacuumed sealed bag).

I decided to go with their Filet Mignon cooked rare, with an extra emphasis on rare, accompanied with sautéed onions and mushrooms and creamed spinach. Twenty-five minutes later, it arrived at my table right off the grill- the char on the beef was exquisite and it had a carnal smell to it that went straight to my hypothalamus. When I sliced it, I discovered it was rare- like I had asked- and it had been properly rested so the juices didn’t all flood out. The filet migon was so tender that the knife barely had to do any work to get through the lush, red flesh. I even enjoyed the sauces that accompanied it: fresh horseradish and whole grain mustard.

The sides that came with the steak were portioned for two, so there was a bit too much for just me. The mushrooms and onions were grilled just right and flavored with garlic. The creamed spinach was the star of the two; the fresh spinach had been blanched and finely minced and mixed with fresh cream.
I am not sure if they had dessert (I wouldn’t have had room for it anyway). The house red, the Wirra Scrubby Rise 2007 was a nice pairing. They had other great wines on wine list as well.

The place was almost perfect, except for a few things. The place is small, so reservations are highly recommended. Also, the bathroom is not on premise but in another building- not uncommon in Korea. Finally, service. There were a couple tables around me that just enjoyed very expensive meals and they were sitting and finishing their wine, yet they were asked to leave for it was near closing time. It would have been better for the servers to simply wait till their guests were ready to leave instead of having them cork their unfinished wine and rush them out the door. Now Isabelles has brought the high-end steak restaurant to Korea, but they need to bring the level of service as well.

Isabelles the Butcher
Itaewon 119-17 Itaewon-dong, Yongsan-gu, Seoul
02-749-9827
Directions: Go out Itaewon Station exit 1 and make a right after the KFC. Make a left at the top of the hill.