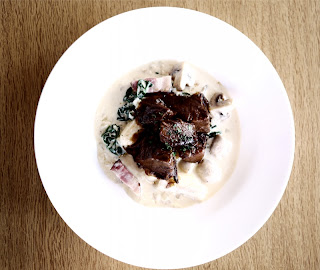 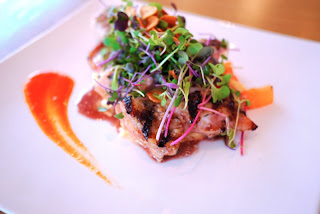 Chef Jang-hyun Cho of the restaurant Kitchen Flo gave up the good life to toil in the kitchen. He was living the Korean dream as a businessman at Samsung. He had a wife and kids; he should have been happy. But after 10 years of corporate life, at age 35, he took his wife and children and moved to England to study culinary arts at London’s Cordon Bleu Academy. He said, “I never cooked at home, but I felt that cooking was similar to my childhood interests of painting and art.” When he returned to Korea, he opened Kitchen Flo in 2005 in Seoul’s French Village: Seorae Maul. I asked the chef if he was worried about opening a restaurant since I am quite aware of the volatile nature of the business. When he opened he said, “I opened the restaurant without fear, because I had never worked in a restaurant before.”

The chef’s artistic interests, fresh approach, and his fearless approach to cuisine makes Kitchen Flo, a gem in the congested restaurant scene. This contemporary European restaurant prides itself in using fresh ingredients and making almost everything by hand.
I was particular impressed with the Charcuterie Plate that has scratch-made foie gras terrine, smoked bacon and bresaola: aged, cured beef. There were even homemade pork rinds on the plate.
Their sausages are exciting as well. The mortadello has wonderful notes of oregano and pistachio. The sausage was perfectly paired with applesauce as an appetizer course. Their spicy and salty chorizo appears with clams in their spaghetti and with garlic bread-also an appetizer.
Now, the coursed meals are where this restaurant shines. The chef doesn’t like to stick with one genre of food. On his menu, you’ll see Korean influences and ingredients fused with European techniques. The menus are seasonal and depend on the chef’s imagination. My dinner course started with a creamy clam chowder that was reminiscent of my visits to New England yet with a twist: the potatoes had been replaced with rice. My salad had fresh mackerel and a tart vinegarette. My entrée was the star of the night: Miso Marinated Chicken topped with assorted shoots over luscious potato gratin with red-pepper paste sauce on the side. The crisp, char-broiled chicken was marinated overnight with the earthy bean paste. The extra touch of two types of garlic: a whole roasted clove and crisp garlic chips made this a truly memorable dish.
My guest had the meat of the day, which was a twist on Royal Court Rice Cake tteokbokki in a cream sauce and topped with slowly braised beef. The sauce was like a creamy carbonara-especially with the delicious chunks of their homemade bacon. The chewy rice cake and the meat made this dish a satisfying entrée.
For dessert there was a fluffy soufflé like cheesecake. Not particularly awe-inspiring, but a nice finish.
Kitchen Flo has a lot going for it. It’s a great date place to have an elegant meal; it’s great for wine with tapas; and it’s great for those wanting food cooked with skill and creativity. This is something that other restaurants in Korea should aspire to.
Kitchen Flo
Seoul, Seocho-gu Banpo 4-dong 91-2 Muju Building 1st Floor
02-3481-0010
www.kitchenflo.com
Average Price: W15,000
Directions: Take a taxi to Seorae Village and get out at Paris Croissant. Cross the street and walk straight. It is on the first floor to the right.
french village recommended restaurant reviews