Insadong Street Food is Alive and Well! But...Should it be?

Confrontation between city, street vendors may escalateNormally a street that contains a harmonious balance of both tranquility and bustling excitement, Insa-dong can leave you with a sense of what Korea might have been.But with the recent crackdown on street vendors, many foreigners are left wondering why the streets look like a warzone and stores are without customers.

After deciding to create a street without cars, and to expand the space for pedestrians at Insa-dong, the Jongno District Office is attempting to relocate the street vendors, who are technically illegal, to designated sectors off the main road.

But street vendors were unanimously favored by foreigners visiting Insa-dong, despite district officials insisting that foreigners do not want them there.

“I like it (street vendors) because they make the food right in front of you and its fun, and they are certainly cheap,” said Ben Whittaker who was visiting from Australia.And according to the district office, foreigners are their main target demographic for Insa-dong.

“We absolutely enjoy the street stalls, and what they have here at the moment is a nice balance between street stalls and stores,” said Thomas Gervay from Australia.According to Kim Keun-ki, leader of an association of the street vendors, this is the only thing he can do for a living, saying that street vendors do not have the luxury of choice.

I am on Insadong street almost every day, but I have noticed that the food stalls are back. They were gone for a day or two, but they came back in full force the next day. This article says that there are less of them, but I honestly haven't noticed. Now the quote in the above article states that the street vendor makes about $20 a day. I dont' believe it. It seems like in their best interest to say they don't make much money.

Now as someone that runs food tours in the city, you would think that the lack of street stalls could hurt our business. Actually, not at all. We don't really go to many street vendors.  It is more important for us to have clean, safe food. Now we do go to some street stalls but we often stay away from the dodgy ones - especially those that do rice rolls (kimbap). Rice rolls are often sponges for bacteria and I wouldn't ever want one of my guests to get sick. My rules to street food is:

Is it fried?
Is it spicy?
Is it vegan?

If it fits into that first category, I consider it. Red Bean Cakes or sweets are generally ok. Oh, if its candy I usually check it if it wrapped. (Sugary things can attract lots of dust and other stuff.)

Then I look into how clean the stall looks and to check to see if the food looks like it has been sitting for a while or not. Also, it is important to see if there is easy access to water.

The issue of street food goes deeper than just the issue of the vendors being out of a job. The people that own brick and mortar stores are also behind the fight against the street vendors. I mean why should they have to pay rent when the street stalls don't? Also, the street stalls block their store fronts and sometimes they compete directly with them for people's business.

Have you been on Insadong on a weekend? Between the mobs of people, street stalls, the store people trying to get people to come in and the occasional bike or car, it has all the elements of a catastrophe. I mean what if there is a fire or an attack or a fight? It could cause major congestion and possible a stampede.

I think what Jongno-gu should do is to really try to help the vendors by designating a street food street like in Singapore : http://www.saveur.com/article/Travels/Singapore-Street-Food. Everything is regulated, people pay taxes, it is clean, and tourists flock to it.

Don't get me wrong, I like street food, but there has to be some sorts of control on it. We wouldn't want any tourists to get seriously sick (I mean that would kill a vacation for anyone, right?). 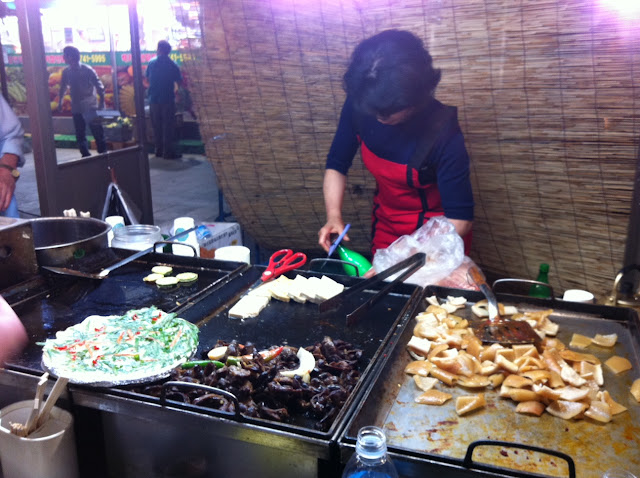