September 17, 2011
Written and Photographed by Troy Zitzelsberger
The first few times I walked by Ankara Picnic, I might have well have been blind. The size of this restaurant gives a whole new meaning to the term hole in the wall. If not for the long line I never would have known of its existence. There are only 6 stools so it’s basically standing room only, a Turkish flag on the wall, and the counter. 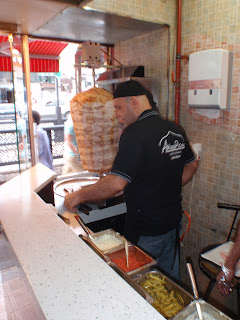 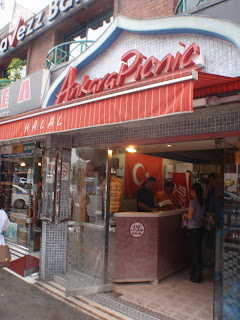 I found the simplicity of the establishment a relief; in my mind it means the focus is where it should be, on the food. At this point on my journey to find Kebab stardom, I have tried most of the establishments so my taste buds know what they are seeking: and I am happy to say they finally found it here.

The only thing more simple then the décor is the menu; chicken kebab (₩ 4,000), lamb kebab (₩4,000), or mixed (₩ 5,000). The price is right, so how about the food. I ordered one of each. The first thing I noticed was that this is the only kebab establishment that puts the kebab in a sleeve making it easy to eat on the go. This may be due to their almost standing room only status, but it’s clever none the less.

The chicken was tender, the lamb was surprisingly juicy, and the meat was plentiful. They also put the typical lettuce and tomato into the wrap as well as the atypical pickle which added a nice little tang to the mix. And then there was the sauce. Just like any kebab joint there are two to choose from. The spicy red pepper based sauce was hot, but not quite nuclear, and the yoghurt sauce was smooth and refreshing. With a big smile on my face, I left satisfied. I have finally found a kebab restaurant worthy of the title.

However, before a Raja can be crowned I have one more establishment to dine at. The search continues… Ankara Picnic is located directly in front of the subway line 6 Itaewon stop, exit 3.
View Larger Map

Pictures are taken either with my Panasonic DMC-G2 Camera with 20mm Lens or with my iPhone 4G
Join the Seoul Eats Facebook Group Page to keep to date with the latest events.
guest writer Itaewon kebab troy zitzelsberger