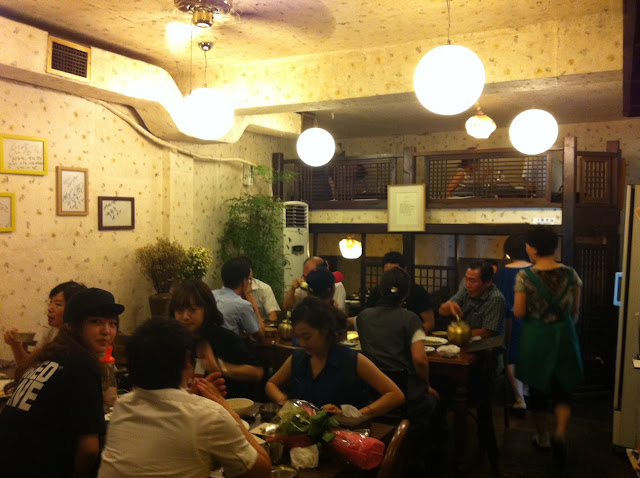 The other night my friend Ben took me to a new hidden little Makgeolli place that I didn't know before. It is hidden in the basement along Insadong Street And it has Makgeolli (Korean Rice Wine) and well prepared Korean Anju (pub food).  The food and Makgeolli are not as good as my favorite Makgeolli places such as Pub of the Blue Star, H-Makgeolli or Chin Chin- but I feel that makgeolli food should be rustic. Also, the price is quite high for what you get (Jeons start at 15,000 and Makgeolli starts at 5,000 a bottle for Seoul Makgeolli). The service is alright but nothing to write home about so... why should you go there?

The atmosphere of the place and the vibe is cool. The place has a hipster feel to it and even the name, Yeojaman is a play on words. Yeoja is girl and man is only, so..".Women Only." But it could also be seen as girl/man (Korean for girl plus Man). It's witty and funny and the place has a whole tongue-cheek feel to it.

We wanted the special makgeolli but they had run out so we had to settle for Seoul Makgeolli (not good) but the food is higher quality than most makgeolli places. They have grilled mackerel, marinated clams and even grilled butterfish on the menu. The butterfish dish is 40,000 won and you get a hefty portion of delicious grilled fish (a bit expensive, but the people that come to Yeojaman are a more affluent and educated clientele).

After our second dish of food, we ordered some Yuja Makgeolli- citron makgeolli. This was a clear makgeolli that was flavored with refreshing citron. Very good and worth the trip here.

Yeojaman is not your typical makgeolli place. It seems a bit California although they serve Kansas-esque drinks. If you are looking for a bit more exclusive, I recommend you come here.