September 28, 2011
Written and Photographed by Troy Zitzelberger
For weeks now I have been searching for a real burger. I have been looking for something juicy and delicious instead of these bland overly sauced burgers that lack bite.  When a new burger joint opens I am always a bit critical, but on a stroll on a glorious Seoul afternoon I stumbled upon M-Burger. It is located where the old Fat Panda Chinese takeout place used to be.  Now you may be wondering; what does the M stand for? Massive, monstrous, mars, miscellaneous, mamacita, or perhaps mashisoyo: honestly, I have no idea.
But however you decide to spin it, the burger that I ate was all of those things and more gently placed in a bun: with two wooden spikes holding it together. After sitting down on the veranda, we were greeted by the owner Michael, a kind and ambitious LA native. His menu is creative and exciting. I was particularly drawn to the Juicy Luicy: a burger stuffed with cheese in the center. He also has a BE (Bacon and Egg Burger), Spicy Jalapeno, the "Real Deal Bulgogi Burger, and a Turkey Burger. He said that the BE (bacon and egg) burger is their number one seller and that their version of the Bulgogi burger is more unique than you’ll find anywhere else in Seoul. 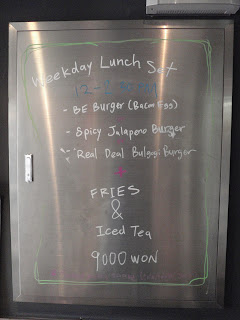 However, he recommended the Juicy Luicy (₩11,000) and my mind was made up. Those who haven't seen Travel Channel in the US, the Juicy Luicy is fashioned by placing a lump of cheese between two patties, molding them together around it, and placing that bad boy on the grill. This creates the world’s most epic cheeseburger: The JL was justifiably named, it was possibly the juiciest burger I have ever eaten and done just the way I like it: a little pink in the middle of each patty. Now at first sight it appeared to be all bun, which in my book is always a no-no. My philosophy is ‘the more meat the merrier’. However, once I grabbed the bun it all proved to have been an optical illusion and I had been pleasantly fooled. My next surprise was that the massive patty was topped with caramelized onions, which added a subtle sweetness that nicely complemented the greasy burger, and with just a hint of mayo. After first bite I decided what the M stands for, Mashisoyo Burger… and delicious it was. I recommend you give them a shot. They have a lunch special from 11-2pm for only 9,000 won.

M Burger can located down the hill and across the street from subway line 3, Noksapyong station exit 2.

Troy Zitzelsberger originally hails from Michigan but has lived in Chicago, New York City, Germany, and now Seoul. He is working as an actor (really, no joke) in Korea and he humbly calls himself, "an unofficial food critic." You can find out more about Troy here.
hamburgers itaewon reviews troy zitzelsberger